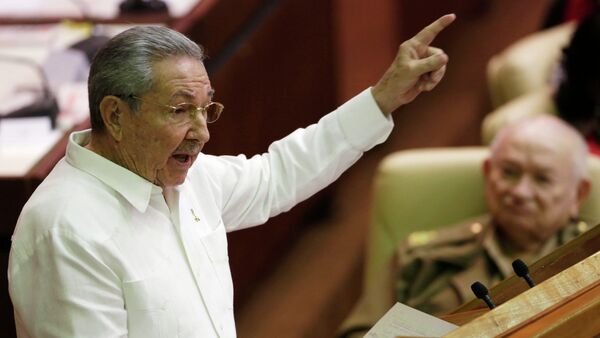 Former Mexican Foreign Affairs Secretary Jorge Castaneda Gutman stated that Cuban leader Raul Castro has made peace with the United States to ensure the success of his economic reforms.

Experts Claim US Congress Efforts to Block US-Cuba Relations Not to Succeed
MOSCOW, December 24 (Sputnik) — Cuban leader Raul Castro has made peace with the United States to ensure the success of his economic reforms but the warming of relations between the two countries is unlikely to solve Cuba's economic woes in the near future, former Mexican Foreign Affairs Secretary Jorge Castaneda Gutman told the Sputnik news agency.

"Cubans knew that without normalizing their relations with the United States, their economic reforms project wouldn't work," Castaneda said, adding that in order to save the Cuban economy in light of a possible halt in subsidies from Venezuela, Havana needs an inflow of investments, tourism and trade only achievable if the United States lifts its embargo on the country — a move unlikely to be made by US president Barack Obama.

"In order for it to happen, Obama will have to achieve something more significant then freeing a political prisoner, but Raul [Castro] is not expected to give up on his political regime," Castaneda said.

Castaneda, who has written dozens of books on Latin American leaders, including a biography of Che Guevara, believes that the United States will keep exerting pressure on Cuba regarding human rights and that overall, the results of detente will be limited in both countries.

According to Castaneda, the detente will have "no real impact on Latin America" too, however it still has a symbolic value as some of the region's leftist governments are viewing it as an important step.

Turning to the reasons why the two countries decided to begin working on the restoration of diplomatic ties last week, Castaneda suggested that "Obama has nothing to lose anymore" and he is acting more independently on a range of issues, including illegal migration to the country and US relations with Cuba. Another reason is that Alan Phillip Gross, the US international development professional convicted in Cuba for illegally bringing telephone and computer equipment, has turned 65 this May. "Americans fear that he will die in a Cuban prison," Castaneda said.

Cuba in turn decided to take this step as "the decrease in oil prices made Cubans realize that the end of subsidies from Venezuela is now on the horizon" and the hole in the country's budget will be impossible to cover.

On December 17, Washington and Havana announced plans to begin working toward the normalization of bilateral relations. On December 20, Castro said that even though Cuba is engaging in dialogue with the United States, it will not abandon its political ideals.