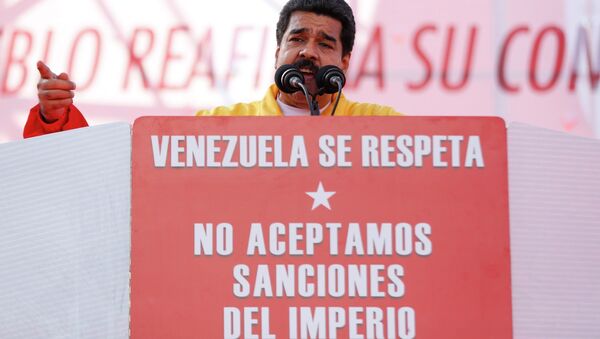 © REUTERS / Carlos Garcia Rawlins
Subscribe
The White House press release reads that US President Barack Obama signed a bill that authorizes him to impose sanctions on government officials, responsible for violations of human rights in Venezuela.

“On Thursday, December 18, 2014, the President signed into law the "Venezuela Defense of Human Rights and Civil Society Act of 2014," which imposes sanctions on persons, responsible for violations of human rights in Venezuela,” the document released Thursday said.

'We Won't Remain Silent': Josh Earnest on US Sanctions Against Venezuelan Officials
Venezuela Defense of Human Rights and Civil Society Act of 2014, introduced by US Senator Robert Menendez, passed in the US Senate and the House of Representatives last week. It authorizes President Obama to impose sanctions on Venezuela’s current and former officials in the form of asset freezes and visa bans for abusing protesters’ rights, who rallied in February protesting against the Venezuelan government.

During the protests, Venezuelan authorities arrested thousands of activists, who took part in anti-government demonstrations. The country’s opposition has claimed that the protesters, some of whom died in clashes with security forces, were targeted for their political beliefs.