President Maduro Says US Aims to Intimidate Venezuela With Sanctions 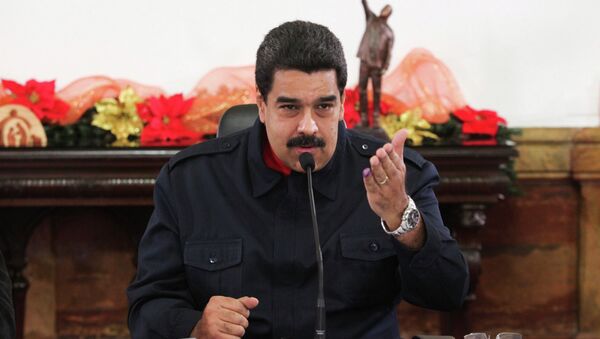 US sanctions against the Venezuela's government officials are an intimidation tactic that could start a conflict between Washington and Caracas, President Nicolas Maduro has announced.

MEXICO CITY, December 14 (Sputnik) – Venezuelan President Nicolas Maduro has announced that fresh US sanctions against the country's government officials are an intimidation tactic that could start a conflict between Washington and Caracas, the El Nacional newspaper reports.

"They [the United States] seek to intimidate us with those sanctions. These visas are the give away," Manduro said as quoted by El Nacional Saturday, referring to the newly-approved US visa bans and asset freezes, which target current and former Venezuelan officials over human rights abuses during anti-government protests that took place in the country in February-May.

The US Congress gave its final approval to the new sanctions Wednesday. The restrictive measures follow travel bans imposed by the United States against Venezuelan officials in July.

According to Maduro, Venezuela is trying to normalize its relations with the United States, but is facing resistance.

Earlier this year, Maduro accused the United States of instigating unrest in Venezuela to get at its oil reserves. According to the Venezuelan leader, Washington had used this "spring" scenario in Honduras and Brazil, as well as Ukraine.