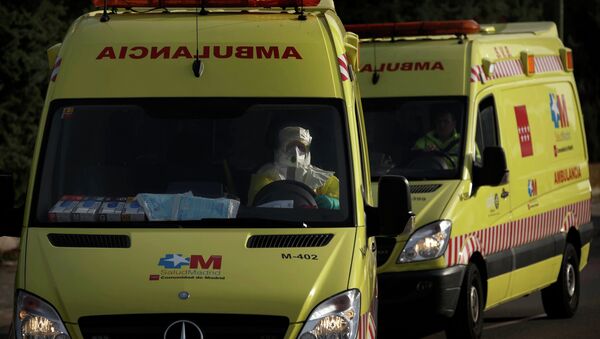 Russian health watchdog Rospotrebnadzor praised response and disease control measures taken in countries that saw cases of importation of Ebola, such as Spain, the United States and Senegal.

MOSCOW, December 18 (Sputnik) – The World Health Organization (WHO) has noted an improvement in the situation with the Ebola virus in Guinea, Liberia and Sierra Leone, which demonstrates effectiveness of efforts taken to contain the deadly virus, Russian health watchdog Rospotrebnadzor said Thursday.

Ebola Listed as US Top Health Threat in 2014: Public Health Institute
"According to WHO estimates, there are signs of reduction of the intensity of the epidemic process in Guinea, Liberia and Sierra Leone, which is a favorable trend demonstrating the effectiveness of efforts in combatting Ebola," the statement read.

The watchdog praised response and disease control measures taken in countries that saw cases of importation of Ebola, such as Spain, the United States and Senegal. According to the statement, such factors have prevented the spread of the disease.

The WHO estimates that the total number of persons affected by Ebola in West Africa is 18,603, with 6,915 lethal cases as of December 14, 2016. There have been 649 cases of Ebola among medical personnel, 365 of which were lethal.

Ebola hemorrhagic fever is a deadly disease that spreads through the contact with bodily fluids of infected persons, or upon contact with contaminated items. There is no known cure or vaccine against Ebola. After this year's outbreak in West Africa, various countries have begun developing drugs to combat the disease.