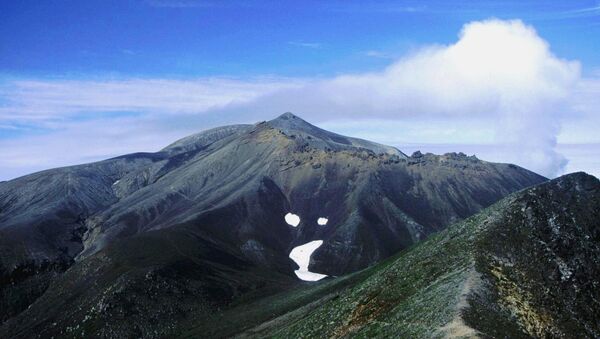 Japan's Meteorological Agency which provides round the clock monitoring of volcanic activity has raised the volcanic eruption alert to the second level for the Tokachidake region in Hokkaido.

MOSCOW, December 16 (Sputnik) – Japan's Meteorological Agency has raised the volcanic eruption alert for the Tokachidake volcano on Hokkaido Island to the second level, warning that small-scale volcanic activity is possible.

The agency has set a one kilometer safe zone around the area as a volcanic eruption may trigger a rockfall. Meteorologists note that Tokachidake's volcanic activity has been growing steadily in recent years, accompanied by small-scale earthquakes. Since July 2014 there have been a number of changes in the rates of seismic activity in the region. For example, in September 2014 there were a series of small earthquakes, "volcanic tremors," lasting for almost 22 minutes. Meteorologists warn that the eruption of ash and small rocks caused by a "tremor" may pose a serious threat to people.

In September 2014, the eruption of Mount Ontake in the Nagano Prefecture became the worst ever volcanic disaster in Japan, claiming the lives of 57 people. Japanese authorities have recognized the need for more specialists with deep knowledge of volcanic activity."We need to train researchers who are familiar with the characteristics of the mountain. It's important to have someone like that around on a regular basis," claimed Nagano Prefecture Governor Abe Shuichi, as quoted by Nippon media source.

Japanese scientists are currently weighing the possibility of Mount Fuji erupting, the highest and most famous mountain in Japan, and also the biggest active volcano in the country. Its eruption would obviously have catastrophic consequences, not only for the nearby prefectures but also for the state's capital.

Some experts have speculated that a string of volcano eruptions could ultimately spell the end of the Japanese archipelago. "Japan could be wiped off the face of the earth by a massive volcanic eruption sometime in the next century killing almost all of its 127 million inhabitants," the Daily Mail reported.
However, Japanese specialists claim that the possibility of a powerful eruption in Japan, that could affect up to 120 million of Japan's 127-million population, is about one percent each one hundred years.