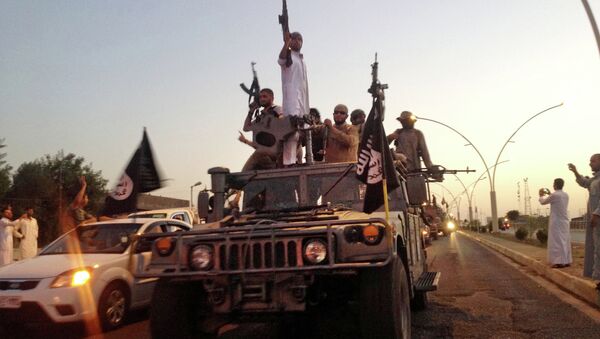 China to Recruit Ex-Soldiers to Protect Xinjiang From Terrorism
MOSCOW, December 15 (Sputnik) — Around 300 Chinese nationals have joined the Islamic State (IS) militant group in its attempt to seize new territories and to establish a caliphate in Iraq and Syria, Global Times reported Monday, citing security officers from Iraq's Kurdish region, Syria and Lebanon.

According to a source familiar with China's anti-terrorism operations, Chinese fighters, as well as fighters from a number of Asian countries, enter Iraq and Syria through Turkey, with Ankara assisting them in receiving passports, the Chinese newspaper said.

Indian Executive Used Twitter to Support Islamic State
"The fact that these extremists can easily enter Turkey and later travel to Syria and Iraq to join IS is a direct consequence of the Turkish government's ambiguous policies," Global Times quoted a source as saying.

The Turkish Embassy in Beijing has denied such allegations, saying that they "only issue passports to Turkish citizens," the newspaper reported.

Another Global Times source from the Kurdish region of Iraq shared with the newspaper a video shot by the IS in October showing "a Chinese brother before he did a martyrdom operation (suicide bomb attack) in the town of Suleiman [Suleiman Bek, Iraq]."

The IS is a Sunni jihadist group that has been fighting the Syrian government since 2012. In 2014, the extremists seized large parts of Syria and neighboring Iraq.

Young people from a number of countries, including the United States, the United Kingdom, Germany, Austria and Australia, have reportedly travelled to Syria and Iraq to join the IS.