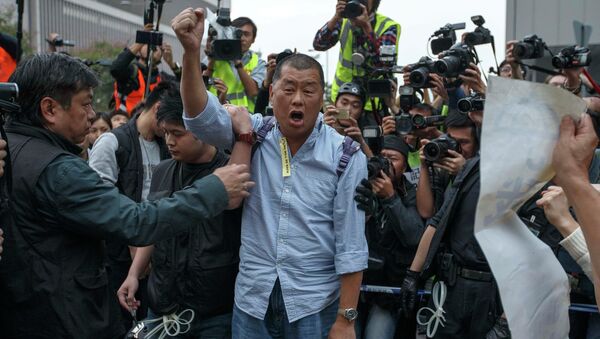 Hong Kong Police Begin Arresting Protesters in Occupy Dismantling Operation
The media magnate’s resignation was reported earlier in the day via a video clip on Apple Daily’s website. Lai's company Next Media Ltd, which publishes Next Magazine and the pro-democracy Apple Daily newspaper, also confirmed that he had been detained.

“Jimmy Lai was taken away around 5 pm (on Thursday). Jimmy Lai also resigned as editor-in-chief of Apple Daily, and Next Media's Print Media CEO Ip Yut-kin will succeed [him],” the video clip said.

Lai’s arrest came after police detained almost 250 activists earlier on Thursday, clearing most of the main protest site near the Central business district and effectively ending more than two months of street demonstrations in Hong Kong.

Beijing Urges UK to Stay Away From Hong Kong, China's Internal Affairs
The protests became one of the most serious challenges to China's authority since pro-democracy demonstrations and the subsequent police clampdown in Beijing's Tiananmen Square in 1989.

Meanwhile, public broadcaster RTHK reported on Friday that all those arrested, including Lai, had been released.

A self-made millionaire, Lai has been the chief financial patron of the pro-democracy movement since Hong Kong’s handover to China’s Communist Party rulers in 1997.

In August 2004, Hong Kong's anti-graft agency officers raided Lai’s home, in a sign that he was under scrutiny. A month later, he was summoned to the Independent Commission Against Corruption, as it is not uncommon for the agency to call in individuals for questioning as part of its investigations.