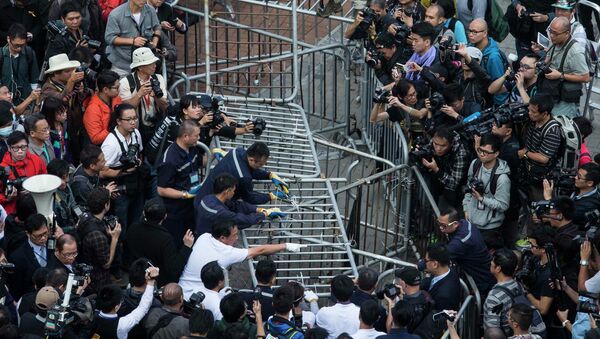 © REUTERS / Tyrone Siu
Subscribe
According to reports, Hong Kong law enforcement officials began to "pluck people away" from a crowd of about 100 sitting protesters, who did not appear to resist.

Hong Kong Authorities Start Clearing Main Protest Camp
MOSCOW, December 11 (Sputnik) — Hong Kong police have begun arresting protesters from the city's Occupy Central movement that are staging a "sit-in" in defiance of a large-scale operation to dismantle barricades and cordon off their camp near the city's government buildings on Thursday.

"This is our last warning. If you do not leave immediately, you will be arrested and carried away," an officer was quoted as saying through a loudspeaker by the South China Morning Post newspaper.

Shortly after protesters were instructed to vacate their camp, the first one was "lifted off her feet and carried to a police van," according to the newspaper's live coverage of the operation. It noted that law enforcement officials began to "pluck people away" from a crowd of about 100 sitting protesters, who did not appear to resist.

Hong Kong Chief Secretary Urges Protesters to Leave Camp Within 20 Hours
Meanwhile, the publication reported small business owners and employees located near the camp welcomed its dismantling, saying their earnings and customer numbers had fallen due to suspended transportation to the area. The High Court order to dismantle the barricades was requested by a local bus company, who has routes cut off because them.

The Occupy Central campaign in Hong Kong began in September following Beijing's decision to vet candidates running in the special administrative region's 2017 election for chief executive. Activists have flooded the streets, blocking roads and demanding the right to choose their own candidates.

The protests have led to numerous arrests and clashes with police, while the city government's headquarters was shut down on December 2.

Hong Kong's sovereignty was transferred to China after over 100 years of British rule in 1997, and the administrative region was granted legal, economic and political autonomy from Beijing under the "one country, two systems" principle.