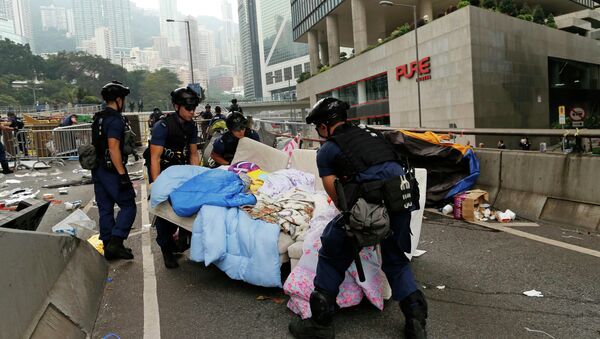 "Everyone should follow the court order and leave immediately," a bailiff said, as quoted by Reuters.

The workers have been enforcing an injunction, granted to local bus company All China Express Ltd, on December 1, on the grounds that protests are hurting its business. Earlier this month, Hong Kong’s High Court ruled that three parts of the main protest camp in the Admiralty district, which also houses the government headquarters, can be cleared.

The police are set to move into the area after the bailiffs finish their work. Officers will clear the debris left on the territory, occupied since late September. "Police will lock down the occupied area and set up a police cordon area. If anyone refuses to leave police will take action to disperse or arrest," Police Superintendent Kwok Pak-chung was quoted by CNN addressing a crowd of students and citizens that have been camping in central Hong Kong for over two months.

Over two months ago, demonstrators took to the streets to protest against Beijing’s decision to vet candidates who are to participate in the election of Hong Kong’s chief executive in 2017. Admiralty has become the focal point of the campaign, which on several occasions saw violent clashes between protesters and police. In total, 129 law enforcement officers have been injured and 655 people have been arrested, according to the Associated Press.

As other teams move in from wan chai and central, police here take down barricades in front of Citic tower #umhk pic.twitter.com/2LQCLqkwkP

Leaders of the student movement urged protesters to stay in the area, but refrain from any violent actions. Many are willing to continue their campaign. "This is not the end of the movement. The political awakening amongst the young is irreversible and we will fight on," Claudia Mo, a lawmaker, told AFP. "I'm not tired (of the movement). I'll never be tired, only the government is tired," said Alice, a 19-year-old student, as quoted by AFP.

Hong Kong Protesters Promise to Return, Police to Clear Protest Camp
Others have already packed their things and are ready to leave. "Some of my friends are prepared to stay till the last moment, but I will walk away," said Lucy Tang, a 20-year-old student, as quoted by Reuters. "I will for sure miss this place. It has become my home," she added. The demonstrations are estimated to have attracted as many as 100,000 people at the height of the protest movement. They have since lost their momentum.

Many Hong Kong residents have argued that the ongoing protests are hurting local businesses, urging activists to go home, according to polls conducted by Hong Kong University and the Chinese University of Hong Kong. Last month authorities cleared a major protest site in the Mong Kok district following a separate court ruling. The injunctions were granted to local transport companies.