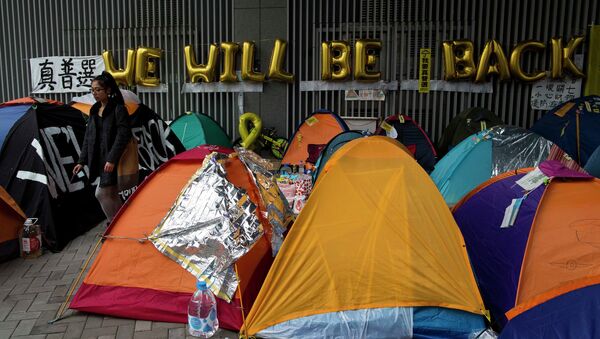 © REUTERS / Tyrone Siu
Subscribe
As authorities plan to clear the protest site on Thursday, some students say they will remain in the area. Hong Kong officials fear that clashes with the police might arise tomorrow morning.

Hong Kong Student Protesters Mull Over Retreat
MOSCOW, December 10 (Sputnik) – As the hours until a police clearance on Thursday tick away, Hong Kong protest leaders at the Admiralty camp said they would “come back”, AFP reported.

The city authorities said several thousand police officers would start clearing the protest site starting 9 a.m. local time (1 a.m. GMT) on Thursday. Protesters were told to pack up and leave before the police would start dismantling the site. According to the authorities, those who fail to retreat from the protest site, will face “resolute action”, as the police are trying to restore public order, AFP said.

“We can’t guarantee there won’t be any confrontations. I appeal to the protesters who have been illegally occupying our roads to pack up their belongings and leave the protest sites,” said Carrie Lam, Hong Kong Chief Secretary, as quoted by Reuters.

Hong Kong Student Protest Leader Breaks Hunger Strike: Reports
Student leaders are encouraging non-violence. Some students, while packing their belongings, said that sweeping away the protesters and dismantling the barricades would not change the public opinion. Many promised that the clearing of the protest site would not be the end of the pro-democracy movement. “We’ll be back,” read a big banner made out of bright balloon letters that was fixed to a wall at the protest site, ABC News reported.

Not all protesters are leaving, however. Some students plan on sitting down and waiting to be arrested, trying to prove their point.

“I will sit here and let them carry me away,” said 23-year old computer repair worker Lucas Wong, as quoted by AFP. “We need to show police we are here, not just tents.”

Hong Kong authorities fear that clashes with the police might arise tomorrow morning. Government officials asked the parents and teachers of the student protesters to try to persuade them to leave the Admiralty area peacefully, AFP said.