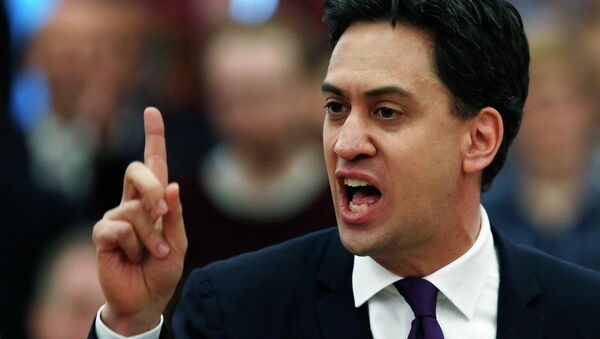 Miliband May Lose Leadership in Labour Party: Reports
MOSCOW, December 7 (Sputnik) — UK Prime Minister David Cameron has retreated from the responsibility of tackling climate change issues because it was not fashionable anymore, UK Labour Party leader Ed Miliband said in a letter published by The Independent on Sunday.

“The environment may not be as fashionable an issue now as it was when David Cameron attached a wind turbine to his house,” Miliband said in the letter, referring to Cameron’s 2010 general election pledge to create the “greenest government ever.”

The opposition leader said that a Labour government would make the UK's electricity supply carbon free by 2030 if they won the 2015 general election.

Miliband also declared a goal for the United Kingdom to become a world leader in green technology by 2025 and create some 1 million new jobs in the energy market.

The Labour leader further slammed the Cameron government for not mentioning climate change issues in the annual Autumn Statement delivered on December 3.

Gordon Brown to Announce Resignation as Member of Parliament: Reports
“If I were Prime Minister, we [Labour Party] would demand that climate change is on the agenda of every international summit in the run-up to Paris,” the Labour leader said, ahead of the May 2015 general election with Cameron and Miliband as the main contesting candidates.

According to a recent report by a UN panel, Paris is the "window of opportunity" for countries to meet their climate change targets.