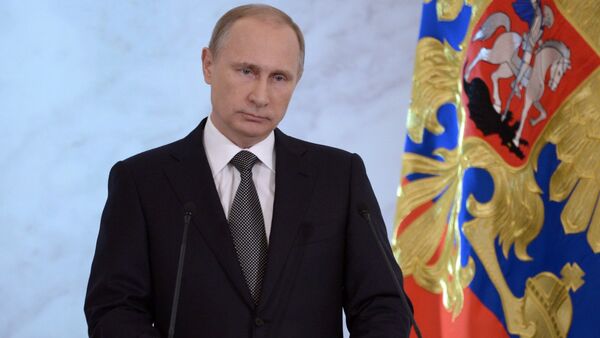 Russia does not want to get involved in a costly arms race, but the country's defense capability will be provided, Russian President Putin said during his annual address to the Federal Assembly.

Putin: Separatism in Russia Was Supported From Abroad
MOSCOW, December 4 (Sputnik) – The continuing construction of strategic missile shield by the US threatens not only Russia and European countries, but also the United States, as it creates a dangerous illusion of invulnerability, Russian President Vladimir Putin said Thursday.

"It [creation of missile shield] represents threat not only to the security of Russia and European countries, but also of the whole world, due to the possible violation of the strategic balance of power. I think it is also dangerous for the United States, as it creates a dangerous illusion of invulnerability, strengthens aspiration for unilateral, often premature decisions and additional risks," Putin said during his annual address to Russian Federal Assembly.

Putin: Russia May Apply Innovative Solutions to Ensure Defense Capabilities
Putin added that Russia did not plan to get involved in a costly arms race, but the country's defense capabilities would be guaranteed.

"We do not intend to get involved in a costly arms race, but, at the same time, we will provide guaranteed defense capabilities of our country in any conditions," Putin said.

The president noted that Russia was ready to apply and had at its disposal innovative solutions to defend the country.

"There is no doubt that Russia has both the possibility and innovative solutions," Putin said.

In October, Vladimir Putin stated that the global security system was seriously weakened and the world was going through a very difficult period. The president also accused the United States of taking steps that aggravate the imbalance of power following the Cold War.

In September, speaking at a meeting to discuss Russia's arms procurement program for 2016-2025, Putin also stressed the demand for a breakthrough in the development of high-precision weaponry in the country. The president added though that Russia's security measures had been purely defensive and Moscow had no plans to join the new arms race.