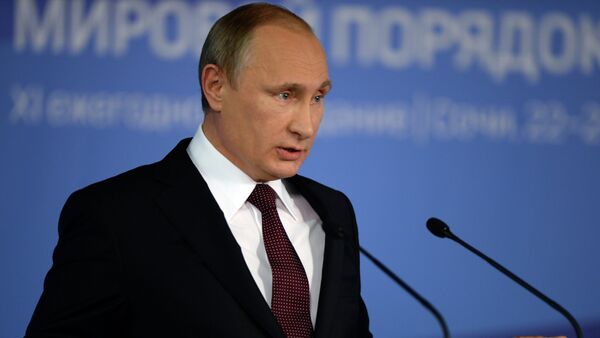 The global security system has been weakened by the Western 'Cold War' mentality and its efficiency can be restored only if world powers work together in a transparent way, Russian President Vladimir Putin said Friday.

SOCHI, October 24 (RIA Novosti) – The global security system has been weakened by the Western 'Cold War' mentality and its efficiency can be restored only if world powers work together in a transparent way, Russian President Vladimir Putin said Friday.

"Unfortunately, there is no guarantee that the existing system of global and regional security can protect us from disruption. The system is seriously weakened, shattered and deformed. International and regional institutions of political, economic and cultural cooperation are going through a very difficult period," Putin said at the plenary session of the 11th meeting of the Valdai International Discussion Club.

"The Cold War is over. But it did not end with peace. [Neither did it end with] a transparent and clear agreement on new rules and standards," the Russian President noted.

According to Vladimir Putin, instead of trying to set up a new balance of powers, which is necessary for the establishment of order and stability in the world, the United States took steps that aggravated the imbalance following the Cold War.

"It looks like the so-called 'winners' of the Cold War are determined to have it all and reshape the world into a place that could better serve their interests alone," the Russian President said, adding that the United States "is spending billions of dollars on surveillance around the world, including on their closest allies" without there being "serious grounds for anxiety".

While spurring distrust among its own allies, Washington is also trying to find "a new Soviet Union" which could serve as an enemy image that would split up the world, Putin noted.

"It does not matter who takes up the place of the Soviet Union, the chief opponent, in the eyes of the US propaganda – be it Iran, a country that is working to create a nuclear technology, or China, a country with the world's strongest economy, or Russia, a nuclear superpower," the Russian President said.

Putin said that Russia is not just in favor of nuclear talks, but strongly insists on negotiating further nuclear arms reductions and is "ready for a most serious talk" on the issue of nuclear disarmament.

"The fewer nuclear weapons there are in the world the better," the Putin stressed, adding that all nuclear talks should be conducted "with no double standards".

According to the Russian President, with enough will and coordinated international efforts, the efficiency of the global security system can be restored.

"I believe that if there is will, we are able to restore efficiency of international and regional institutions' system. And there is no need to build anything from scratch… Especially considering the fact that institutions created after the World War II are universal enough that they can be filled with more up-to-date content which is adequate to the current situation," Putin said.