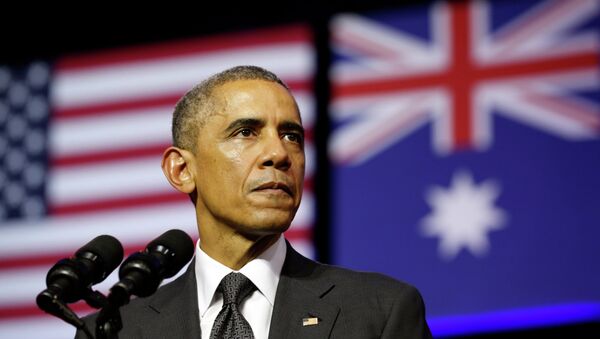 US Senator Ted Cruz applauded the efforts of his state in the lawsuit, filed against the 'patently unconstitutional' Obama's immigration reform.

WASHINGTON, December 4 (Sputnik) – US Senator Ted Cruz applauds the efforts of his state for leading a 17-state coalition, which is suing US President Barack Obama for his executive action on immigration, the Texan senator has told Sputnik.

"I applaud the state of Texas for leading the fight to stop the president's lawlessness," Cruz said Wednesday.

"I think what the President did is patently unconstitutional," the senator stressed, adding that Republicans in Congress must do what Texas and the other states involved in the lawsuit have done, namely, "honor the commitments we made to the voters, defend the rule of law, and defend the Constitution".

Cruz urged members of Congress to withhold funding for the implementation of Obama's executive action in a Wednesday press release.

On Wednesday Texas Attorney General Greg Abbott announced that Texas was leading a coalition of 17 US states that are suing Obama for his executive action on immigration, which, according to the lawsuit filed by Abbott, is a violation of the US constitutional limits on the president's power and would end up causing individual states to spend more money on law enforcement, health care, and education.

Obama's executive action, announced on November 20, aims to prevent up to five million illegal immigrants, who have lived in the country for more than five years, from being deported from the United States.

Members of the US Republican party are sharp critics of the executive action and have questioned Obama's authority to take unilateral steps to solve the immigration problem in the United States.