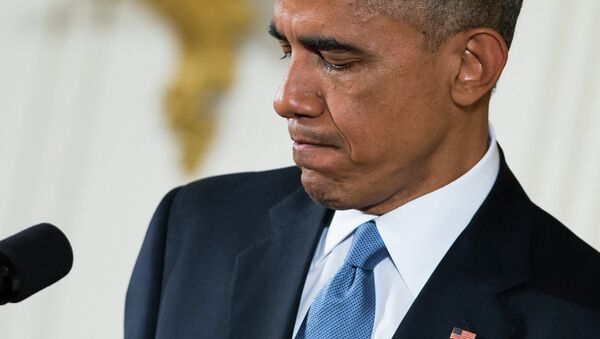 17 US states have filed a lawsuit, forcing Obama to follow the prescribed constitutional process of enforcing laws in his executive action on immigration.

WASHINGTON, December 4 (Sputnik) – A lawsuit, challenging US President Barack Obama's executive action on immigration has been filed on behalf of 17 US states, Texas Attorney General Greg Abbott, has announced.

"We [the state-plaintiffs] are asking for the court to require the president to go through the prescribed constitutional process of enforcing laws, passed by congress rather than making them up himself," Abbott said Wednesday.

The lawsuit, which is the 31st Abbott has filed against the Obama administration, challenges the legality of US president's executive order on immigration announced on November 20.

Obama's executive action aims to prevent up to five million illegal immigrants from being deported from the United States. The measure would give an opportunity to illegal immigrants who have lived in the country for more than five years and parents of children who are US citizens or legal residents to apply to stay in the United States temporarily. Applicants would have to pass a background check and pay taxes.

Members of the US Republican party are sharp critics of the executive action and have questioned Obama's authority to take unilateral steps to solve the immigration problem in the United States.

Obama had warned the Republican-controlled House of Representatives that he would take unilateral action on immigration if Congress failed to implement comprehensive immigration reform.