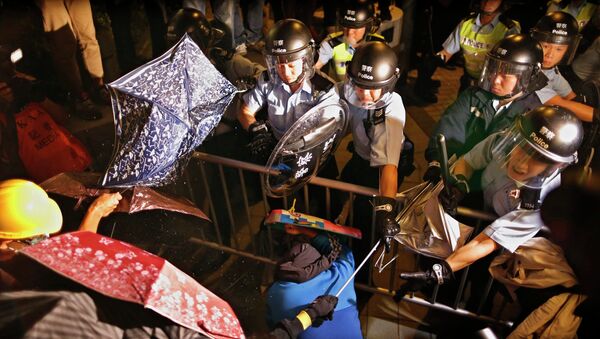 Nearly 30 Arrested in Hong Kong Protests: Reports
MOSCOW, November 30 (Sputnik) – Clashes between police and pro-democracy protestors in Hong Kong continued on Sunday, when attempts by activists to protest outside government buildings were stopped by the authorities.

According to Reuters, hundreds of people chanting "surround government headquarters" and "open the road" marched toward government buildings in the Admiralty district, east of the city’s central business area, before police intervened and made arrests.

The unrest follows clashes early on Saturday in Hong Kong’s Mong Kok district, where clashes between thousands of activists and hundreds of riot police armed with batons, shields and pepper spray was reported. The area has been the site of conflict since Wednesday, when police cleared one of the movement’s biggest protest sites. On Friday night and the early hours of Saturday 28 people were arrested in Mong Kok, a busy shopping and residential district, Reuters reports.

On Wednesday the Guardian reported that 116 people were arrested by police during the operation to clear the protest site, including two of its student leaders Joshua Wong and Lester Shum. They were later released on bail, one condition of which was a ban on returning to the area around the site.

Protesters Smash Windows in Hong Kong Legislature, Try to Break In
Students’ groups said on Thursday after the police clampdown that they were not deterred from their protest. "Further actions include a possibility of some escalations pointed at government-related buildings or some of the government departments," a representative of the Hong Kong Federation of Students told CNN.

Support for the demonstrators in Hong Kong has waned since the protests began at the end of September, when young people took to the streets in protest at Beijing’s August decision to rule out free elections for the post of Hong Kong chief executive. Bloomberg quotes a poll by the Chinese University of Hong Kong held in early November, according to which 67 percent of those surveyed believed the protestors should stop the occupation, and 44 percent expressed opposition to it.