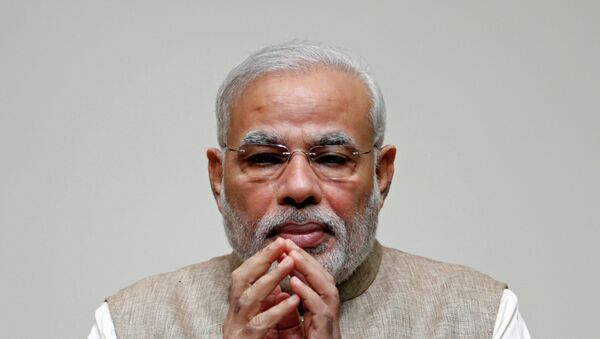 "This year, Modi, who got the top job after the BJP stormed to victory in India’s national elections in May, is leading the readers’ poll with over 10.7% of the votes cast as of Thursday afternoon," Time magazine reported, adding that the Indian leader "has raised hopes" among his compatriots that he will boost the country's development and prosperity.

Abdel Fattah al-Sisi sits in 38th position this year. By January 2014 the winner of the 2013 Time readers' poll had ousted Mohamed Morsi and cracked down on the Muslim Brotherhood and its supporters. Talking about the overthrow of Morsi, the Egyptian President insisted that the military action was necessary, because "it was the Egyptian people who demanded that change of identity."

Recep Tayyip Erdogan, the Turkish President who took second place in 2013, has slid to 40th position. However, the former Prime Minister, Tayyip Erdogan, has substantially strengthened his positions in Turkey as the most powerful politician in decades, regardless of the wave of protests which emerged in Istanbul during his term as Prime Minister.

Bashar al-Assad, the Syrian President, who took 10th place in 2013, has dropped to number 25 in 2014. Despite pressure from the Islamic State and Western-backed guerrillas, al-Assad is still occupying his presidential position, which he successfully regained through the national democratic elections in June 2014.

Time's Person of the Year is a tradition dating back to 1927. Since that time, the United States news magazine has been carrying out annual surveys in order to find out "who for better or worse has most influenced the news and our lives in the past year."