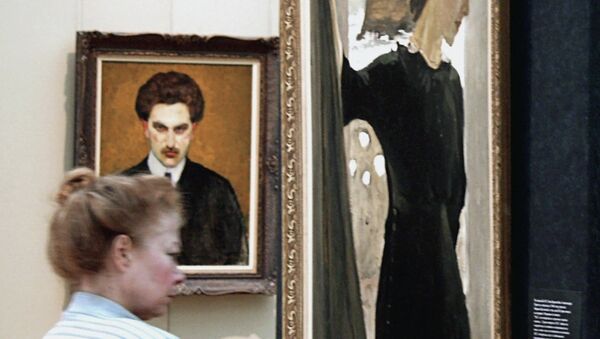 Christie's had initially estimated the painting's price at $2.3-$3.9 million.

MOSCOW, November 24 (Sputnik) – The fine arts auctions house Christie's has sold Valentin Serov's painting Portrait of Maria Zetlin for $14,511 million during bidding in London, setting a record for a piece of Russian art sold at auction.

Serov's work was put up for auction by Israeli city Ramat Gan's administration. Christie's had initially estimated the painting's price at $2.3-$3.9 million.

"The Portrait of Maria Zetlin is without doubts, Serov's most unique work, which I had the honor of holding in my hands during a long history of my work at Christie's," International director of Christie's Russian Art Department Alexei Tizengauzen said ahead of the auction.

He stated that the elegant pose of the sitting woman, drawn in Serov's customary silver palette "personifies skills of the prominent Russian portrait painter".

The painting has never been put up for auction before.

Valentin Serov was one of the superior artists of the late 19th century. Serov was born is St. Petersburg in 1865 and died in 1911, aged 46. He preferred to use black-gray or brown tones in his paintings, while sometimes using impressionistic features in his portraits. His best known works include a Portrait of Nikolai Rimsky-Korsakov, Portrait of Ida Rubinstein, and Coronation of Nicholas II of Russia.

Maria Zetlin, the subject of Serov's painting was also painted by many other Russian artists, such as Sergey Chekhonin and Alexander Yakovlev. Maria and her husband Mikhail were collectors of Russian art, which they gifted to the city of Ramat Gan in 1959.The maintenance of such an extensive collection costs a lot of money, so in order to raise funds for the museum, the Ramat Gan administration decided to sell one painting only, promising to use the funds for the development and reconstruction of local galleries.