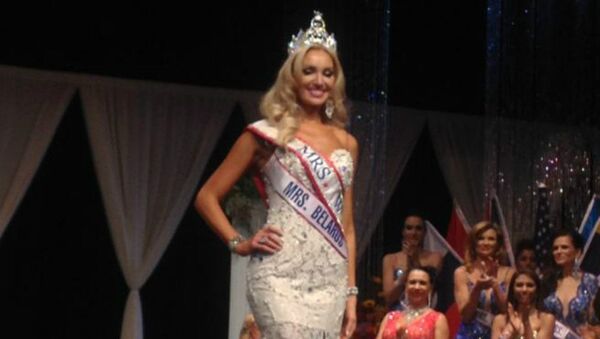 Alexeychik, 31, was married four years ago and is a television host and singer.

The event lasted for eight days and women from 35 countries competed in the pageant in the United States. During the contest, participants showed off not only their looks, but also talents and abilities, such as dancing and cooking.

Russian actress Natalia Nikolayeva, holder of the Mrs. Sevastopol title, was among the finalists along with participants from Poland and Peru. Russia was represented by one more competitor — Olga Pankova, a television host, Mrs. Russia winner and mother of four children.

The show was broadcast at 8 p.m. local time on Wednesday (4 a.m. Thursday, Moscow). Contestants took to the stage wearing national costumes or dresses. In particular, Pankova wore on her head a double-headed eagle, the symbol of Russian statehood, combining the European and Asian parts of Russia, while Nikolaeva wore a dress in the style of Empress Catherine II.

Only married women can take part in Mrs. World beauty contests. Those who have children and actively participate in public life and charitable activities are the most preferred candidates.

The contest was established in 1985 and has taken place in various locations worldwide.

Russia hosted the pageant’s final three times in a row: in St. Petersburg in 2006, Sochi in 2007 and Kaliningrad in 2008. Russian women have won the title twice. Sofia Arzhakovskaya in 2006 and Viktoria Rodochinskaya in 2009 claimed the tiaras.

The next contest will be held in Beijing.