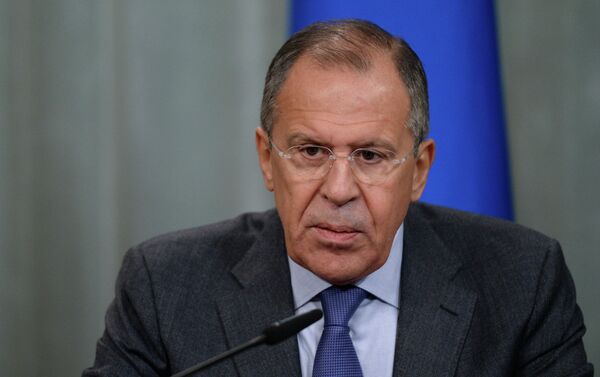 © Vladimir Astapkovich
Subscribe
The deal on an Iranian nuclear program was initially supposed to be reached by July 2014, but the deadline for the agreement was later postponed to November 24, 2014.

BEIJING, November 8 (RIA Novosti) — Russia and the United States are determined to do their best to reach an agreement on Iran's nuclear program before November 24, Russian Foreign Minister Sergei Lavrov said Saturday.

"We have a mutual disposition, with the Americans as well, to do everything possible in order to meet this deadline [November 24]," Lavrov said after the bilateral meeting with the US Secretary of State John Kerry on the sidelines of the Asia-Pacific Economic Cooperation (APEC) summit in Beijing.

"'Six' international mediators (US, UK, France, Germany, Russia and China) and Iran are holding talks to elaborate a system of guarantees of the exclusively peaceful nature of Iran's nuclear program in exchange for a full gradual removal of international sanctions against the country. And such an agreement between parties should be worked out until November 24," Lavrov added.

The Iranian nuclear issue is one of the major topics to be discussed at the APEC summit, ahead of the upcoming P5+1 group talks with Tehran scheduled to take place on November 11 in Oman.

The deal on an Iranian nuclear program was initially supposed to be reached by July 2014, but the deadline for the agreement was later postponed to November 24, 2014.

The West and Israel have accused Iran of attempting to develop a nuclear weapon under the guise of a civilian nuclear program, while Tehran argues that its nuclear development is aimed purely at meeting the country's growing energy needs and achieving other peaceful goals.

The APEC CEO Summit is taking place this weekend in Beijing, China, and will be followed by the APEC Economic Leaders' Meeting (AELM) on Monday and Tuesday. The meetings welcome 21 nations to discuss economic issues as well as global efforts to respond to the Ebola virus epidemic, the situation in Ukraine, and other ongoing issues.