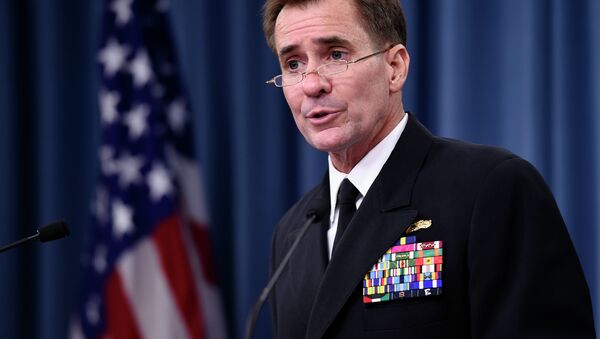 © AP Photo / Susan Walsh, File
Subscribe
Pentagon Press Secretary Rear Adm. John Kirby said in a statement on Friday that US to deploy 1,500 troops to Iraq and create training centres as part of the country’s mission to combat the Islamic State militant group.

WASHINGTON, November 7 (RIA Novosti) – The United States is going to deploy 1,500 additional troops to Iraq as part of the country’s mission to combat the Islamic State (IS) militant group, Pentagon Press Secretary Rear Adm. John Kirby announced in a statement on Friday.

“The commander in chief has authorized Secretary of Defense Chuck Hagel to deploy to Iraq up to 1,500 additional US personnel over the coming months, in a non-combat role, to expand our advise and assist mission and initiate a comprehensive training effort for Iraqi forces,” Kirby said.

According to the release, US Central Command will establish two expeditionary centers outside of Baghdad and Erbil, as well as several training sites for the Iraqi army.

“US Central Command will establish several sites across Iraq that will accommodate the training of 12 Iraqi brigades, specifically nine Iraqi army and three Peshmerga brigades,” the statement said.

Kirby added that coalition partners will also join US personnel at these locations to help build Iraqi capacity and capability,

The training will be funded through the request for an Iraq Train and Equip Fund that the administration will submit to Congress as well as from the Government of Iraq, the press secretary noted.

The US-led coalition is currently carrying out airstrikes on the IS targets in Syria and Iraq. The coalition currently consists of more than 60 countries, according to the US State Department.