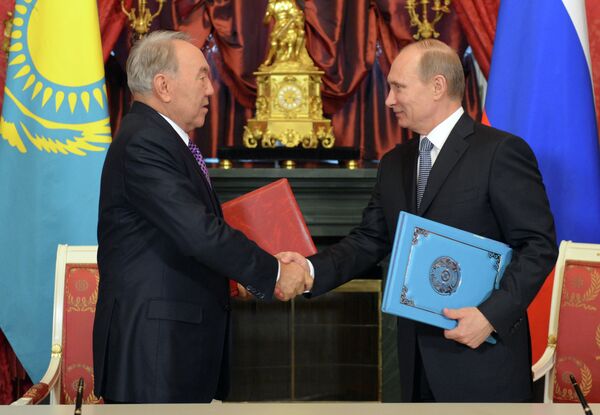 Russia and Kazakhstan have agreed a three-year roadmap for the joint use of the Baikonur space center, the Russian presidential administration said on its website Tuesday.

MOSCOW, December 24 (RIA Novosti) – Russia and Kazakhstan have agreed a three-year roadmap for the joint use of the Baikonur space center, the Russian presidential administration said on its website Tuesday.

“We are pleased with this latest meeting and it has been very productive,” Russian President Vladimir Putin said. “Since our last meeting there has been a lot of work on concrete issues related to deepening and expanding cooperation in sensitive areas, including on energy issues and Baikonur.”

The announcement came following a meeting of the two countries’ presidents on the sidelines of a Eurasian economic summit in Moscow on Tuesday.

Most of the details of the agreement were not disclosed, but Kazakhstan’s President Nursultan Nazarbayev said it "provides the possibility of involving our Ukrainian partner Yuzhmash," producer of the Zenit rocket that launches commercial satellites from the facility.

Currently leased by Russia from Kazakhstan for $115 million annually, Baikonur is the launch site for manned Soyuz rocket launches as well as Russia’s Proton heavy-lift rocket. Proton launches were suspended for three months this summer following a post-launch explosion in one of the rockets that rained blazing, highly toxic propellants on the Kazakh countryside.

Last month Kazakhstan sent Russia an $89 million bill for the cleanup effort. There was speculation in the media that Moscow had refused to pay the sum, but earlier this month Deputy Prime Minister Dmitry Rogozin, who oversees the Russian space and defense sectors, said an understanding had been reached for the continued Proton launches.

Moscow and Astana have been in sometimes acrimonious talks over Baikonur's lease terms since the dissolution of the Soviet Union in 1991.