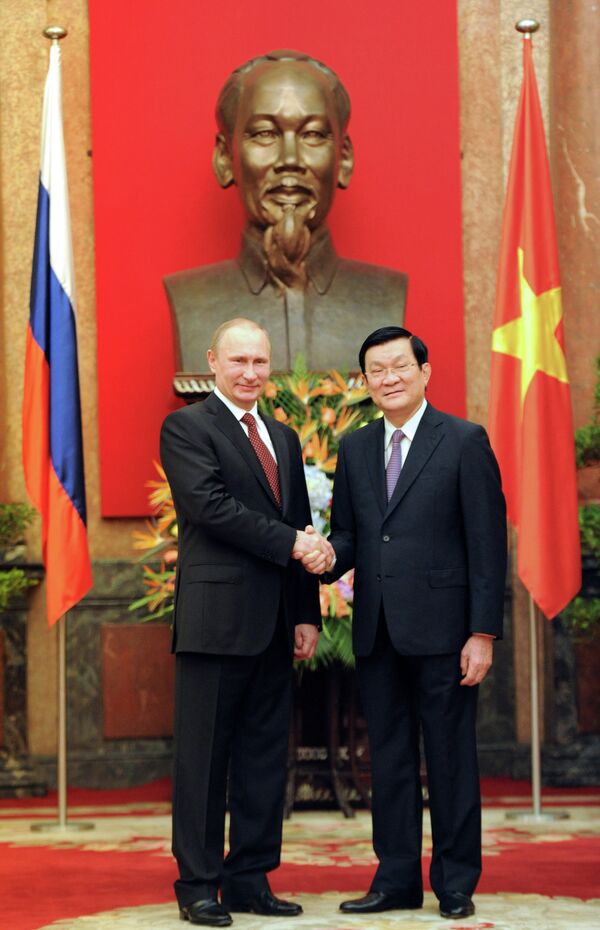 © RIA Novosti . Alexei Nikolsky
/
Go to the photo bank
Subscribe
Russian President Vladimir Putin signed a number of key cooperation agreements with Vietnam during a state visit to Hanoi on Tuesday that is expected to significantly boost relations between the two nations.

HANOI, November 12 (RIA Novosti) – Russian President Vladimir Putin signed a number of key cooperation agreements with Vietnam during a state visit to Hanoi on Tuesday that is expected to significantly boost relations between the two nations.

After talks with the country’s leadership, Putin said Russia and Vietnam, a priority partner in the Asia-Pacific region, have “taken another serious step in strengthening joint cooperation.”

“We had very substantial, useful and successful talks with the Vietnamese president and prime minister,” Putin said at the meeting with Communist Party of Vietnam General Secretary Nguyen Phu Trong.

Officials from both nations signed a number of agreements on cooperation in different areas, including on military issues, science and technology, as well as on extradition. Vietnam has become a major buyer of Russian weapons since 2010.

The two countries have agreed to intensify talks on reaching an agreement to set up a free trade zone between Vietnam and the Moscow-led Customs Union of Russia, Belarus and Kazakhstan.

Trade between Vietnam and Russia is projected to nearly double to $7 billion in 2015, from $3.66 billion last year. That figure is expected to reach $10 billion by 2020.

Putin is set to continue his Asian tour with a visit to South Korea on Wednesday.

Putin went ahead with the trip despite concerns over safety as the region continues to struggle coping with the devastating fallout of Typhoon Haiyan, which has claimed more than 10,000 lives in the Phillipines, which lies across the South China Sea from Vietnam.