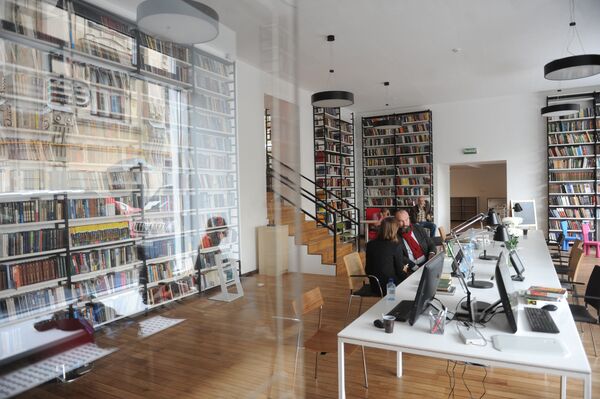 The Russian capital’s libraries are undergoing a transformation – from uninviting places with Soviet-era rules to airy, open spaces with multimedia gadgets.

MOSCOW, September 26 (Kevin O’Flynn, The Moscow News) – The Fyodor Dostoyevsky Library – so named following the Russian Revolution – opened in 1907 on the first floor of a downtown Moscow apartment building constructed for the city’s growing middle class. It has had many lives since. Its latest began last month as one of the city's new showcase libraries.

Today, the biblioteka is a world away from its cramped previous incarnation, most of which was inaccessible to the public. Huge glass windows now open onto tree-lined Chistoprudny Boulevard, where the building stands, and the rooms inside are airy, exploiting its high ceilings. The chief librarian welcomes those who enter, signing them up for a library card and telling them about the building’s history.

The man leading the library revival is Boris Kupriyanov, the owner of Falanster, an independent bookshop in downtown Moscow that specializes in radical, political and intellectual literature. It has been raided by police, and once was forced to move after it burned down in a suspected arson attack.

And Sergei Kapkov, the city’s top culture official known for transforming its parks, asked Kupriyanov to take on the libraries.

There are more than 400 libraries in Moscow and a number of them are excellent, Kupriyanov said, but the majority are uninviting places with iron doors, strict rules, inconvenient opening hours and a design left over from Soviet times.

Some libraries were closed or forced out in recent years – most famously the Nekrasov Library, near a downtown McDonald's. But miraculously, most remain intact.