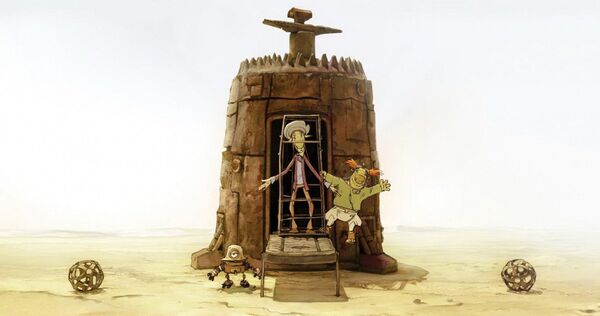 © Photo : Nashe Kino company
Subscribe
International
India
Africa
A renowned Russian filmmaker and member of the Academy Award selection committee for Russia reportedly said Friday that a steampunk cartoon by his colleague should be the country’s only nomination for this year’s best foreign film award.

MOSCOW, August 23 (RIA Novosti) – A renowned Russian filmmaker and member of the Academy Award selection committee for Russia reportedly said Friday that a steampunk cartoon by his colleague should be the country’s only nomination for this year’s best foreign film award.

Nikita Mikhalkov thinks that “Ku! Kin-Dza-Dza” by Georgy Daneliya is “this year’s only choice,” Russian media quoted him as saying. Mikhalkov won the best foreign film Oscar in 1994 for his “Burnt by the Sun” drama, in which he played the lead role.

“This is a remarkable film by a great director,” Mikhalkov was quoted by Russian media as saying.

Daneliya, a Russian filmmaker of Georgian origin, has directed more than 20 films, most of which enjoyed immense popularity and are still considered classic. His breakthrough 1963 film, “Walking the Streets of Moscow,” starred Mikhalkov in his first major film performance.

“Ku! Kin-Dza-Dza” is an animated remake of Daneliya’s 1986 sci-fi comedy “Kin-Dza-Dza.” The Coilhouse online magazine dubbed the original film “Soviet steampunk” for its use of minimalist scenery – most of the film was shot in the Karakum desert in Soviet Turkmenistan – and criticism of the Communist dogma.

The film is “rich with a [not entirely subtle] critique of Communism and the poignant bitter humor I expect from Soviet-era films along with crunchy puns, rust, dust and a Mad Maxy landscape throughout,” the 2008 Coilhouse review said. “Steampunk costumes and gadgets make appearances and are actually utilized in a way that makes sense!”

The plot revolves around two Soviet men who get teleported to the planet Pluk in the Kin-Dza-Dza galaxy. They encounter a society divided into two castes and struggling to survive on the desert planet, whose water and other resources have been turned into fuel by previous generations.

The locals use telepathy and a handful of spoken words to communicate. Their planet is ruled by a senile autocrat who resembled the septuagenarian Soviet leader Leonid Brezhnev, who died in 1982 while Daneliya was working on the film, the director said in his 2006 autobiography.

Daneliya said that the idea to remake the original film stemmed from a US film company’s offer that he received a decade ago. The animated version, which cost 140 million rubles ($4.2 million) to make, was released in April and co-directed by Tatyana Ilyina.