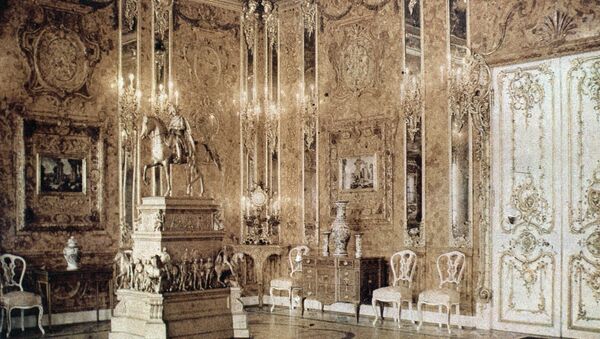 Russian craftsmen in the Baltic exclave of Kaliningrad are to recreate parts of the legendary Amber Room, a Tsarist-era antiquity which was looted by German forces at the end of World War II.

KALININGRAD, May 14 (RIA Novosti) - Russian craftsmen in the Baltic exclave of Kaliningrad are to recreate parts of the legendary Amber Room, a Tsarist-era antiquity which was looted by German forces at the end of World War II.

The restoration plan by the regional government of Kaliningrad, the Russian Baltic exclave with the world's largest known amber deposits, is part of a campaign to stop illegal mining in amber-rich areas near the Baltic coast.

Experts estimate that 60-100 tons of amber is mined illegally every year in the Kaliningrad Region, which is believed to hold more than 90 percent of the world's total known amber reserves and is home to the world’s only strip-mined natural amber deposit.

King Frederick I invited German craftsmen to decorate the main hall of his palace with amber panels shortly after his accession to the Prussian throne in 1701. But after the king’s death in 1713, his son Frederick Wilhelm I put an end to the expensive work, and put the amber panels on the walls of a small room of the Large Royal Palace in Berlin.

Three years later, he gave the panels as a present to Russia's Tsar Peter I, who stored them in his Summer Palace, the Peterhof. It was only in 1743 that Empress Elizaveta Petrovna decided to use the amber panels to decorate one of her main chambers in the Winter Palace.

The original decorations were enlarged and were eventually turned into the legendary Amber Room, often referred to as the "eighth wonder of the world."

The decorations were looted during World War II by Nazi German forces, and taken to Konigsberg (now Kaliningrad) where they were lost in the fierce fighting and air raids there at the end of the war in 1945. Only two small parts of the room's decoration were eventually rediscovered and returned to Russia.

According to the region’s Culture Minister Svetlana Kondratyeva, the recreated room will be installed in the 1899 building of the Konigsberg State Amber Factory following its renovation, which will then be transferred to the city’s Museum of Amber.

Museum visitors will be able to watch the craftsmen at work replicating the room through a glass pane.