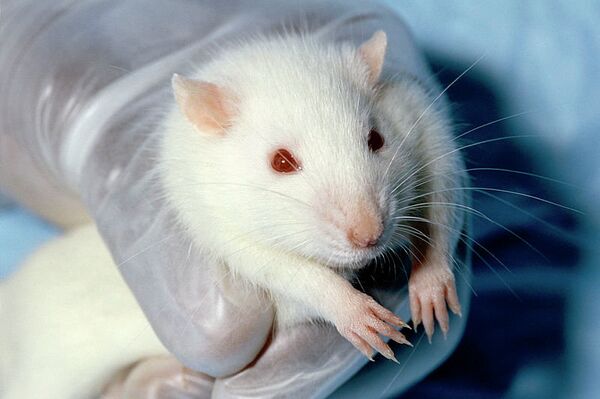 This week the European Union (EU) implemented a ban on the sale of cosmetics tested on animals, a major victory according to US animal rights activists, who on Wednesday unveiled a celebrity media campaign with the hopes of getting more Americans to put pressure on the US government to enact an animal-testing ban of its own.

WASHINGTON, March 13 (By Sasha Horne for RIA Novosti) This week the European Union (EU) implemented a ban on the sale of cosmetics tested on animals, a major victory according to US animal rights activists, who on Wednesday unveiled a celebrity media campaign with the hopes of getting more Americans to put pressure on the US government to enact an animal-testing ban of its own.

“In Europe the public was very passionate and involved with the issue of animal testing, and I don’t think we are there yet in the US,” said Pascaline Clerc, the Senior Director of Animal Research Issues at the Humane Society of the United States (HSUS).

But turning that opposition into action has been difficult said the Humane Society, which hopes its “Be Cruelty-Free” celebrity ad campaign will help influence the public and increase support for ending what it describes as an, “outdated and ineffective practice of cosmetic animal testing.”

The EU ban, which went into effect on Monday, prohibits the sale of new cosmetic products containing ingredients tested on animals.

New cosmetic products manufactured outside of the 27 nations that make up the EU, but containing ingredients that were tested on animals, could still be sold in Europe.

The caveat, EU health officials said, is that manufacturers must be able to document the safety of its products to EU regulators without using data gathered by animal tests.

While it supports the end of animal testing, Cosmetics Europe, a trade association representing Europe’s cosmetics industry said in a statement, it objects to the timing of Monday’s ban.

“Unfortunately, by implementing the ban at this time, the European Union is jeopardizing the industry’s ability to innovate,” Bertil Heerink, the association’s director said.

There is some evidence the European ban will affect the US cosmetic market. Over the course of the past several years, as Europe has slowly phased out animal testing, it has resulted in a dramatic drop in animal testing among US cosmetic and personal care product manufactures who have an interest in selling their products overseas, the Associated Press reported.

In the United States, the Food and Drug Administration (FDA) prohibits the sale of unsafe cosmetics but does not require animal testing to prove how safe they are.

Many cosmetic companies use rabbits, guinea pigs, mice and rats to test ingredients and products or they hire outside organizations to conduct testing for them, animal rights activists told RIA Novosti.

Animal rights groups want cosmetic companies to use alternative forms of testing including lab-generated human tissue and skin, but there are drawbacks to those methods industry experts said.

“There are non-animal tests that are really valuable, informative, cheaper, and quicker,” Jennifer Sass, a scientist with the Natural Resources Defense Council, a nonprofit that examines how the environment impacts human health, told RIA Novosti.

But Sass said that testing synthetic human parts isn’t as effective. “For example if you test a chemical on a patch of synthetic skin, but the damage occurs to the immune system or the damage occurs when the chemical enters the blood stream – a skin test couldn’t show that.”

“If you are going to put chemicals into products that people will be exposed to, then we need to test these products on live things,” Sass said.

A position the EU’s cosmetic industry tried in vain to convey to its leadership ahead of Monday’s ban.

“The ban ignores the reality that science is not yet ready to bridge existing knowledge gaps and that non-animal alternatives cannot address all ingredient safety questions,” Cosmetics Europe said in a statement.

Animal rights activists in the United States hope the EU ban will force international scientists and researchers to create a new market for alternative tests that can ensure the safety of humans without testing on animals.

“They believe we can live in a world without animal testing, and we believe that is a big risk,” Sass said.