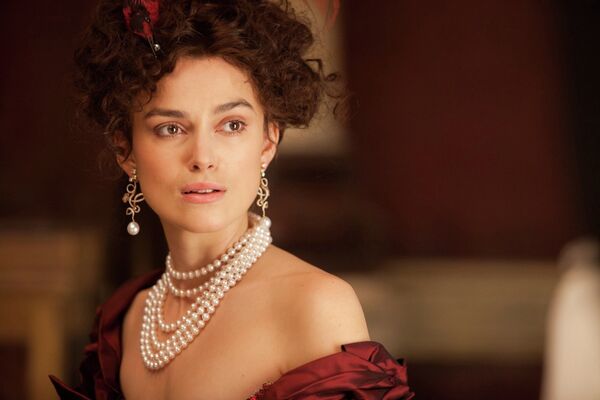 The new film adaptation of Leo Tolstoy’s 900-plus-page epic novel “Anna Karenina” hit US theaters on Friday, becoming the latest in a long list of Hollywood representations – or misrepresentations, as some critics charge – of Russia and Russian literary classics.

WASHINGTON, November 17 (RIA Novosti) - The new film adaptation of Leo Tolstoy’s 900-plus-page epic novel “Anna Karenina” hit US theaters on Friday, becoming the latest in a long list of Hollywood representations – or misrepresentations, as some critics charge – of Russia and Russian literary classics.

Early US reviews of the film, with actress Keira Knightley cast in the title role, have been mixed, with most critics agreeing that it is visually sumptuous but sub-par in other aspects. The Russian blogosphere meanwhile has been derisive, with one blogger describing the new film as an “intellectual bordello.”

Here is a non-exhaustive list of some other prominent Hollywood versions of Russian classics, or films with a Russian subject matter, of the past half-century:

War and Peace (1956):  A film adaptation of Leo Tolstoy’s novel which uses the backdrop of the Napoleonic invasion in 1812 to tell the story of the complex lives and relationships of three main characters: Natasha, Pierre, and Andrei.

From Russia With Love (1963): James Bond, played by Sean Connery, is on a mission to find a Russian decoding machine, known as Lektor, and gets entangled in an assassination plot that involves a beautiful Russian woman.
Box Office Gross:  $78,900,000

Reds (1981): This film is based on a true story of John Reed, an American journalist, who became involved with the Bolshevik Revolution in Russia and returned to the US in hopes of bringing the same ideas to America. The movie won Academy Awards for best actress in a supporting role (Maureen Stapleton), best cinematography, and best director (Warren Beatty).
Box Office Gross:  $40,382,659

Gorky Park (1983):   A Moscow police investigator tries to solve a triple homicide that occurred in Moscow’s Gorky Park, which leads him to discover that the murders are part of a government conspiracy.
Box Office Gross:  $15,900,000

Red Heat (1988):  A Russian policeman, played by Arnold Schwarzenegger, is on a mission to find a drug dealer from Georgia who escaped to the US and is awaiting extradition.
Box Office Gross:  $34,994,648

The Hunt for Red October (1990):  US actor Sean Connery, who plays a Russian commanding officer of the new nuclear Soviet submarine Red October, violates orders to prevent Russians from using the sub to attack the United States. This movie won an Academy Award for best sound editing.
Box Office Gross:  $199,200,000

Enemy at the Gates (2001): Two snipers, one from Russia and the other from Germany, play a game of cat-and-mouse during the World War II Battle of Stalingrad.
Box Office Gross:  $96,976,270

Eastern Promises (2007): A Russian teenager dies while giving birth and leaves clues in a journal that could tie her baby to a rape involving a Russian mob family.
Box Office Gross:  $16,866,286