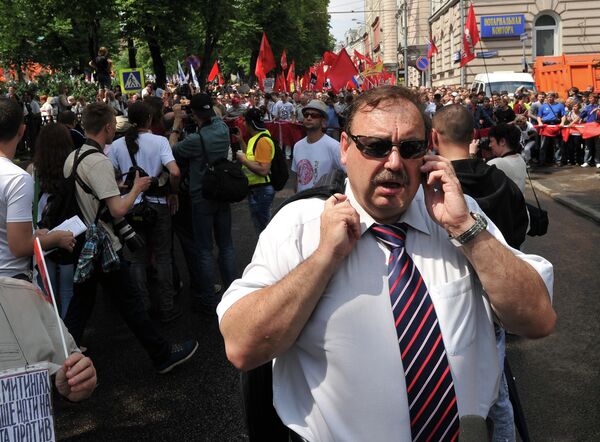 He may be facing a controversial expulsion from parliament, but opposition lawmaker and former KGB officer Gennady Gudkov had no inkling the row over his future would turn him into, as he jokingly puts it, “Russia’s second biggest newsmaker after Pussy Riot.”

He may be facing a controversial expulsion from parliament, but opposition lawmaker and former KGB officer Gennady Gudkov had no inkling the row over his future would turn him into, as he jokingly puts it, “Russia’s second biggest newsmaker after Pussy Riot.”

“I didn’t expect this kind of attention at all,” he says as he fights his way through late afternoon Moscow traffic after a long day of interviews with journalists from across the globe. “But it won’t change anything. The Kremlin doesn’t pay any attention to – and I’m being ironic here – such trivial things as the opinion of the international community.”

Gudkov, 56, could be ousted from the State Duma, the lower house of parliament, in a vote set for September 12 over allegations that he has been directly involved in commercial activity while serving as a lawmaker, something forbidden under Russian law.

The vote was called after investigators asked for his expulsion so that they could charge him with fraudulent business dealings in a case that could also see him face jail time. State Duma members receive immunity from prosecution.

United Russia’s parliamentary faction has already indicated it will vote for Gudkov’s ouster should the allegations be confirmed, and the party’s slim majority would be sufficient to approve his dismissal.

The case is almost without precedent. Gudkov, who has been a member of parliament since 2001, would become only the second lawmaker in post-Soviet Russia to be removed from parliament without a court ruling. The only previous legislator to be ejected after a simple Duma vote was Sergei Mavrodi, head of the notorious 1990s MMM pyramid scheme, which cost millions of Russians their life savings.

But Gudkov denies the accusations against him and says they are the Kremlin’s revenge for his involvement in the mass opposition protests that broke out after last December’s disputed parliamentary polls.

“This is pure payback for my opposition activities,” he says.

Investigators began probing Gudkov’s activities shortly after the clashes between police and protesters in downtown Moscow on the eve of Vladimir Putin’s May 7 inauguration to the Kremlin for a third term. But the portly, mustachioed lawmaker warns that political violence will only increase if he and those who share his moderate views are sidelined.

“The Kremlin is making a real mistake,” he says. “If it forces people like me – who insist on dialogue with the authorities – out of the protest movement, then my place will be taken by radicals and extremists. And the clashes we will see then with police will be no laughing matter at all.”

He links the attempt to expel him from parliament to what he says is part of a wider crackdown on dissent that has also seen opposition figurehead Alexei Navalny charged with large-scale embezzlement in a case that could land the popular anti-corruption blogger in jail for up to ten years.

Gudkov has frequently warned that tensions between the Kremlin and opposition forces could lead Russia into “civil war,” and he nods grimly when asked to confirm that he genuinely believes the country is on the threshold of yet another bloody upheaval.

“We’re likely to see something like what’s happening in the North Caucasus,” he says, referring to the low-level Islamist insurgency that plagues Russia’s mainly Muslim southern region. “An underground war, as it were, that gnaws away at the state from within.”

And Gudkov has a track record when it comes to prescient warnings of political turmoil.

With just more than two weeks to go before last December’s parliamentary poll, he delivered an emotional speech in the State Duma, simultaneously haranguing and warning lawmakers from the ruling United Russia party over what he says were plans to rig the vote to ensure a parliamentary majority that looked increasingly unlikely in the face of fading public support.

“Even a hare, when driven into a corner, will turn into a beast,” Gudkov raged. “And you are driving not only the opposition, but the entire country into a corner.”

“The people will go into the streets and we will go with them if the vote is falsified,” he went on, jabbing a finger at fellow members of parliament “We don’t want this, but you are forcing us into this situation.”

It was a remarkable transformation for Gudkov, who up until this winter’s protests had been a loyal member of the A Just Russia party, widely viewed by analysts as a Potemkin parliamentary opposition faction with no genuine desire to challenge the status quo.

But as allegations of vote fraud surfaced in the aftermath of the election, Gudkov joined tens of thousands of disgruntled Russians at a central Moscow protest to rally for a new vote and express their opposition to Putin’s plans to return to the presidency after a four-year hiatus.

Gudkov and his son, Dmitry, 32, also a State Duma lawmaker, are among a handful of members of parliament who have joined forces with an opposition movement that has seen an uneasy alliance among liberal, communist, and nationalist forces.

“They’ve taken parliament and elections away from us – there is no democracy there,” Gudkov says as he drives past the central Moscow square that played host to last winter’s first mass opposition demonstration.

“And now they are even taking the streets away from us with all these new laws,” he continues, in a reference to recently introduced laws restricting public protest.

Gudkov has been criticized by both Kremlin supporters and members of Russia’s fractured opposition over his decision to remain in a parliament he has dubbed illegitimate, but he dismisses allegations of hypocrisy.

“Look, in parliament I can give a voice to opposition sentiments,” he says. “Even in our undemocratic country, if there is a chance to make opposition statements, then we have to use that chance.”

Gudkov is not your typical Russian opposition figure. Like Putin, he is a former KGB officer, and he also remains a reserve colonel in the Soviet security service’s successor, the FSB.

“I joined the KGB when I was 25, but I’d wanted to join since I was as at school,” he recalls with a smile. “It was a dream job for young boys back then. I even wrote a letter to [KGB chief Yury] Andropov and got a reply – from his secretary, of course. But I was pretty pleased.”

His decision to join the KGB came despite his family’s suffering at the hands of Stalin’s executors.

“My grandfather on my mother’s side was arrested and shot during Stalin years,” he says. “The state officially apologized later, but you can’t replace a man with a piece of paper.”

He says his desire to join the Soviet Union’s secret police was born of a desire to “bring about change from within.”

“As far back as I remember, I have always felt that the country was moving in the wrong direction,” he says. “I always read at school. Not all that Marxism-Leninism they fed us, but real books, and at a very young age I realized that they were saying one thing and doing another and that this couldn’t go on.”

He does, however, agree with Putin on one thing at least.

“The break-up of the Soviet Union really was, as Putin once put it, the greatest geo-political tragedy of the 20th century,” he says. “We could have kept the country together – not as a socialist state, but as a united country, instead of splitting off into separate republics.”

But that’s about all the common ground he finds with his fellow KGB officer.

“I don’t think Putin thinks good things about me right now,” he laughs, beeping furiously on his vehicle’s horn as he sits in a traffic-jam.

Putin’s victory in March’s presidential election was grudgingly recognized by many opposition figures who, despite allegations of an unlevel playing field and electoral violations, admitted that their arch-nemesis was, for now at least, Russia’s most popular politician.

Much of Putin’s popularity is down to the widespread opinion that he is the only figure with the experience and strength of character to hold Russia together. But Gudkov dismisses this argument with thinly veiled irritation.

“They say ‘If not Putin, then who?’ But if in a country of 145 million people there are no other worthy figures, then all I can say is woe to a people who cannot formulate a normal political system.”

“They also said ‘If not Stalin, then who?’ ‘If not Brezhnev, then who?’ Under the current system, anyone can become a great leader, so to speak, without having any outstanding qualities,” he adds.

But Gudkov admits he has generally positive memories of Putin’s first term in office.

“Putin seemed okay in his first term. He introduced some positive reforms that were necessary after the Yeltsin-era, but these have all now been overturned,” he says. “I think, you know, he just got a taste for power and it ruined him.”

“He is more the president of the regions than Moscow now,” Gudkov continues as he passes along the multi-lane, downtown thoroughfare through which Putin’s motorcade sped on its way to a glittering Kremlin inauguration this May.

Gudkov reacts with mock anger to suggestions his son Dmitry may have influenced his decision to take sides in Russia’s increasingly tense political divide, but expresses genuine concern for his future.

“He has a clear understanding of what needs to be done in government,” he says. “And I think that in the future this will serve him well. That is, of course, if the country doesn’t return to Stalin-era type repression.”

“And, you know, it’s already begun. 1937 didn’t happen straight away,” he adds, a reference to the peak of Stalin’s purges. “It was a gradual process.”

But Gudkov shrugs off suggestions that he might come to regret his dramatic transformation from establishment figure to the opposition’s “man in the Duma.”

“I regret only that I was born in Russia,” he says.

It’s a startling admission, even if he qualifies it as a “half joke.” Russians are by nature a very patriotic people and even the most radical of opposition figures are careful to stress their pride in the homeland.

“I envy people in other countries who have normal democratic institutions, stability in society, and healthy competition. And so on,” he explains.

“We have fallen a hundred years behind Europe, to say nothing of the United States, in so many spheres. We are even stating to lag behind some former third world countries now,” he adds.

“That’s how things are,” he sighs, as he arrives at the north Moscow radio station where he is due to give yet another interview. “But we have a saying in Russia. ‘Hope dies last’. There is,” he says, “always hope. Even when there is none.”