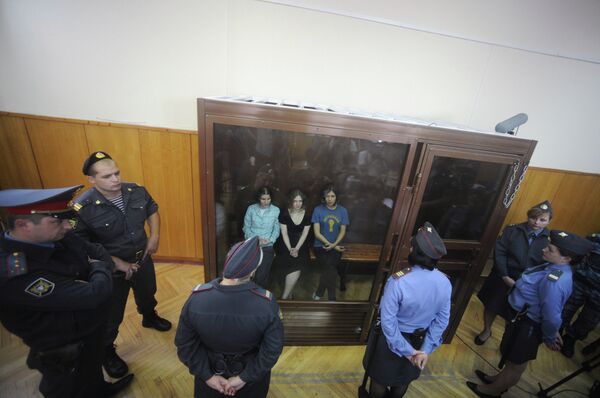 The Kremlin’s hardline policy on flashy opposition stunts, demonstrated by the crackdown on the punk band Pussy Riot, is not something new and dates back to the early 2000s, even though the dissenters are very different now, political experts and protest veterans said.

The Kremlin’s hardline policy on flashy opposition stunts, demonstrated by the crackdown on the punk band Pussy Riot, is not something new and dates back to the early 2000s, even though the dissenters are very different now, political experts and protest veterans said.
“There’s a definite continuity to the policy,” said Alexei Makarkin of the Moscow-based Center for Political Technologies.

Years before Pussy Riot, who last week were given two years behind bars for a “punk prayer” at a church, activists of the now-banned National Bolshevik Party, or NBP, were being slapped with prison terms for acts of civil disobedience bordering on art performances.

National-Bolsheviks’ relentless campaigning marginalized them rather than make them international celebrities like Pussy Riot due to the party’s hardcore radicalism coupled with public apathy at the times when the country’s wealth was fledging on growing oil prices, experts said.

But a considerable part of the Russian society has since undergone political awakening, and Pussy Riot cut a much more acceptable hero figure for the middle class than the NBP’s leftist imperialists – though the government is mostly oblivious to it and still uses the obsolete ham-handed approach to offenders, Makarkin told RIA Novosti.

NBP’s founder and longtime leader, firebrand writer Eduard Limonov, himself a man of innate artistry who lived out his life like a novel, scoffed at the mention of Pussy Riot.

“And we’ve paid a much higher price,” Limonov said. “Don’t compare us to these fashionable broads.”

He has the right to talk: Limonov himself served a two-year jail term in the early 2000s on charges of illegal firearms possession that stemmed from the unproven accusation of planning an invasion into the former Soviet republic of Kazakhstan to bring it back under Russian rule. Dozens of his party comrades were handed jail terms of up to 10 years over the past decade for non-violent anti-government stunts.

But Sergei Yezhov, a former National-Bolshevik who was given 1-1/2 years in 2004 over a brief seizure of a Health and Social Development Ministry building in Moscow in protest of the government’s social policies, admitted links between two generations of protesters.

“The similarity between us and Pussy Riot is that there was no crime,” said Yezhov, who returned to opposition politics after walking out of jail. “The reasons for our conviction and jailing were political.”

What earned the National Bolsheviks their prison terms in the early to mid-2000s were seizures of governmental offices, including several ministries and a public reception office of the Kremlin administration.

Once inside, the protesters simply shouted their demands and hung anti-government banners out of windows. The party’s tactics also included pelting officials with eggs at public events, though none of those attacks resulted in prison terms for perpetrators.

But the Kremlin was attentive at the time of “color revolutions,” or street protests that have resulted in changes of longstanding regimes in neighboring Georgia, Ukraine and Kyrgyzstan, experts said. The crackdown on Limonov’s followers, which culminated in the ban on the party in 2007 over alleged extremism, was universally taken as a message to all those who dared to openly challenge the regime.

The diagnosis is similar to what most spectators said about the Pussy Riot trial. Though convicted of hooliganism motivated by religious hatred, the group claimed their performance in a church in February was political, targeting the newly sealed alliance between the church leadership and then-presidential candidate Vladimir Putin.

The Pussy Riot verdict was a warning from the Kremlin to its opponents, primarily the “creative class” – young educated urbanites who unsuccessfully rallied in the tens of thousands in recent months against Putin’s return to power, analysts said.

The Art of Protest

Pussy Riot are not National-Bolsheviks of the early 2000s, if only because they explicitly bridge the gap between art and politics, said Mikhail Tulsky of the Center for Political Analysis, a think tank.

The “punk” group grew out of Voina, a radical art collective famed for street performances, one of which – a 65-meter-long phallus painted on a drawbridge across from a Federal Security Service building in St. Petersburg last year – even won the prestigious Innovation art award.

Voina has always viewed the “political actionism” of National-Bolsheviks as a source of inspiration, said Pyotr Verzilov, a member of one of the art group’s factions and the husband of one of three jailed Pussy Riot members.

“[But] Voina has eschewed our covenants” by taking on religion, said Limonov.

“Our message was social,” said NBP’s Yezhov, himself an Orthodox Christian. “They are raising ethical questions, which are always much more ambiguous.”

Pussy Riot is channeling the demands of the “creative class,” which wants Russia to adopt a Western societal model, complete with democratic freedoms and strict separation of church and state, Makarkin said.

In the 2000s, Western-minded urbanites subscribed to Putin’s promise of stability in exchange for political rights, but they are disappointed in the exchange now and want the rights back, most experts said about the ongoing anti-Kremlin protests in Moscow.

The Kremlin is actually trying to adapt to new times, which explains the jail term for Pussy Riot being slashed to two years from the maximum seven after Putin called to not punish them too “harshly,” Makarkin said. But it was not enough to stem the outrage, he said.

“The authorities are behind the curve because society has changed, and because they are afraid that concessions will be seen as a weakness,” Makarkin said.