Where Girls in Bikinis Look for Vikings 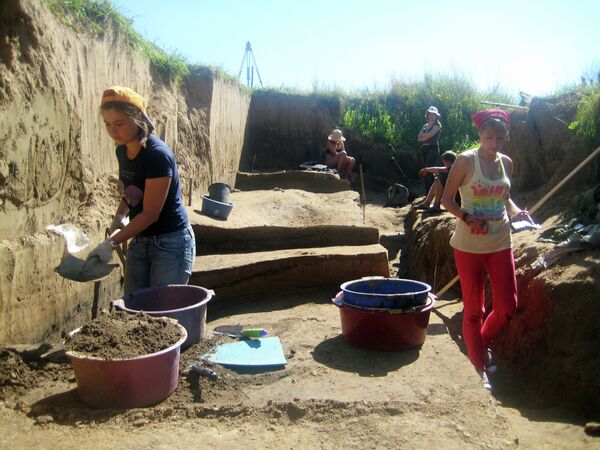 Indiana Jones tells you archeology is about wild chases and getting your whip out, but it’s really about dredging in the muck. Of course, there is also camaraderie, partial nudity and, in the case of Smolensk Region’s Gnyozdovo dig, the biggest Viking burial ground in the world.

Indiana Jones tells you archeology is about wild chases and getting your whip out, but it’s really about dredging in the muck. Of course, there is also camaraderie, partial nudity and, in the case of Smolensk Region’s Gnyozdovo dig, the biggest Viking burial ground in the world.

“We will not get all the work done here in my lifetime,” said Tamara Pushkina, the co-head of the archeological expedition in Gnyozdovo, a prospective UNESCO World Heritage site.

The dig in Gnyozdovo has been active since 1949, but with some 20 hectares and more than 4,000 burial mounds to be sifted through for metal tools, beads and pottery shards, it really stands a chance of lasting for generations.

However, “black archeologists” and illegal real estate development could speed up the process, ruining prospective dig sites before the underfunded Russian archeologists get to them, expedition bosses said.

You normally would not look for Norsemen on the shores of the Dnieper, some 60 kilometers east of the Belarusian border and 400 kilometers west of Moscow.

However, a vital trade route passed here from Scandinavia to Byzantium and beyond in the Middle Ages.

Norsemen – mostly Swedes, as Danes and Norwegians were focused on pillaging Western Europe – settled here in the 10th and early 11th century, mixing with Slavs incoming from Central Europe and the region’s indigenous inhabitants, the Balts.

Gnyozdovo was an important urban settlement, housing between 800 and 1,000 people at its peak – on par with such centers of medieval civilization as Sweden’s Birka and Hedeby, Pushkina said.

Nobody quite knows why the settlement died out, with theories ranging from war to a change in silver flows in Eurasia, but there is still plenty of material evidence to be uncovered a millennium later.

An archeological paradise looks like a perfectly regular meadow with a myriad of inconspicuous lumps of dirt scattered behind it, not really worth a second look.

Not worth it, that is, until you realize that every small hill is a burial mound from the Viking age.

“Only 1,200 mounds have been examined since the amateur excavations began in the late 19th century,” Pushkina said. “Though, of course, that’s not counting illegal digs.”

The finds are mostly pottery shards and small bits of metal. This season’s highlights include a rusty palm-sized knife and a tiny metal head of pagan god Odin, a part of cosmetic tweezers used to pluck eyebrows or beard hair.

There was also an Arab silver coin, a dirham – one of millions that passed through the region as payment for its honey, hemp and slaves sold to the south (academic consensus is that slavery is economically unfeasible in the northern climate). Gnyozdovo’s biggest haul ever was 72 coins, and the best result in the recent years was five – but still enough to thrill.

“This girl with a really loud voice found it,” Pushkina said. “She suddenly fell quiet and told me, in a dramatic whisper, her hands shaking: ‘Tamara Anatolyevna! I think I found a treasure!’”

“We’re building up the databases,” Pushkina said about the finds. “It gets turned into articles, and dissertations are written based on what we’ve accumulated here. It has its uses.”

They Always Come Back

However, there are also volunteers – former interns who come once and keep returning to Gnyozdovo year after year to squat in manmade holes, drag about tubs full of earth and generally enjoy life.

“It’s this feeling of camaraderie,” said Pyotr Radzikhovsky, a volunteer who specializes in modern history, but spends his Julys at Gnyozdovo. “It’s a feeling like nothing else.”

It is a heady cocktail of history, youthful enthusiasm and romance, which naturally thrives in places where young people of both sexes work in the scorching sun, dressed accordingly – think bare-chested boys and girls in shorts and bikinis. Some affairs born from a touch of hands over a tub end in tears, but others have been known to lead to marriages, and Gnyozdovo friendships last a lifetime.

You start at the bottom, literally: a RIA Novosti reporter offering to help was told where to get a shovel to help a young lady move a pile of sandy soil from one place to another.

It was unqualified and tiring work, but the result – having a dig wall reinforced against collapsing – was gratifying. And those who want serious work soon graduate to looking for actual finds with a trowel in hand.

Volunteers actually pay to work at Gnyozdovo – $5 to $10 a day, but still. The expedition struggles to cover their food and lodging, but between red tape and a tight budget, there is not much it can do.

The money should suffice to feed a couple dozen mouths for a month, provide them with a decrepit bus to take them to the dig and back every day, house them for the night at a Soviet-era tourist camp – complete with instructions for reading topographic maps and, inconceivably, a Confederate flag – and proceeding the finds.

There are also modest salaries for senior staff, though the government sees it fit to take back 30 percent of it in taxes, compared to the regular income tax of 13 percent, due to peculiar regulations on scientific research.

“It’s still better than it used to be ten years ago,” Pushkina said. “We used to refuse international cooperation because we were too embarrassed of the conditions we lived in.”

Now students from Nordic countries pop up at the expedition every season. There is even a Swedish flag fluttering in the middle of a Smolensk field over one of the digs, a gift from friends that the archeologists keep on raising despite an outburst of patriotic fuss from the locals.

Dig Where You Live

There are no more Norsemen in Gnyozdovo, but there is still life. Gnyozdovo is actually a modern name for a village that sits right atop the archeological site, with locals planting potatoes and beets where smithies and trade factories used to be.

This makes for some tense moments, because landowners cannot build here nor do any other serious earthwork until they request an archeological examination of the patch of land they plan to develop.

Examinations cost money, while ignoring the rules results in fines – two sets of sums that meager-budgeted villagers are always comparing against each other.

Private landowners are generally history-conscious enough and do shell out money on excavations whenever they want to expand their houses or add a sauna to the site, Pushkina said.

The sums range from 30,000 to 80,000 rubles ($900 to $2,400), though the expedition is always giving discounts, which is better than running the risk of getting artifacts destroyed by illegal construction, she said.

But local authorities are less willing to pay for things like sewer works, Pushkina said.

Besides, there are rich landowners on the fringes of the archeological site encroaching on its turf, said Andrei Korolyov of the recently incepted Gnyozdovo Museum.

“They’ve got four-meter-high fences there, you know,” he said. “You can see it’s no simple dacha owners.”

“We’re going to take them on, but it’s going to be a tough battle,” Korolyov said.

“Black archeologists,” who plunder historical sites for loot they then sell to underground collectors, are also a headache, Pushkina said.

Stealing archeological artifacts can be a criminal offense, but the thief needs to be caught red-handed to qualify for serious punishment. In most cases, they get away with modest fines and losing their metal detectors, which can be had for as little as $200.

“They had some show trials in Novgorod, which helped the situation,” Pushkina said, referencing another bountiful archeological site. “But nothing of the kind is brewing here so far.”

However, so far UN functionaries were not overly impressed with the idea of recognizing what looks like a perfectly regular Russian landscape as a world heritage site.

“We’ve had some mail exchanges with them, but they’ve said, get something done here first,” Korolyov said.

Scandinavian sites of the same kind, like outside Uppsala where Swedish pagan kings were buried, come complete with museums and tourist routes. But the museum in Gnyozdovo is still in an inchoate stage.

Museum organizers have to plow through a lot of red tape while on a deadline until the end of 2013, the year when Smolensk celebrates its 1,150th anniversary, which won the region a hefty federal grant set to run out by 2014.

Even building a pedestrian crossing over a railroad going through Gnyozdovo – just a few metal steps on each side of the tracks – required a personal stamp of approval from the president of Russian Railways, Vladimir Yakunin, Korolyov said.

Building a museum will be a Herculean task, he said. But he seemed to have enough battle spirit for that, maybe thanks to the Viking influence.

“We just need to get it off the ground,” Korolyov said. “We can make it just like in Europe, only bigger.”