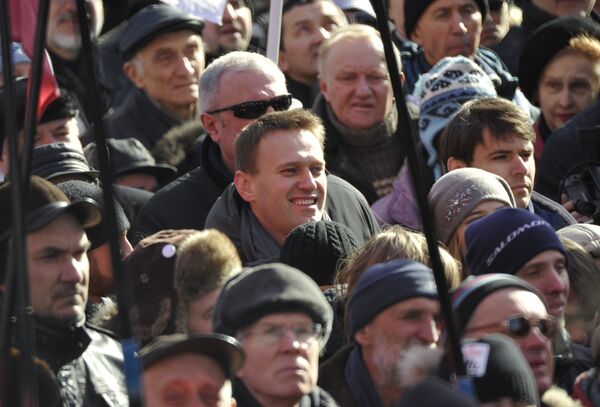 Much has been said in the recent days about the imminent decline of the protest movement after Vladimir Putin’s undisputed victory in the presidential elections.

Much has been said in the recent days about the imminent decline of the protest movement after Vladimir Putin’s undisputed victory in the presidential elections. But a whole new trend has emerged during the rally on Novy Arbat on Saturday – a shift of the emphasis to local politics in the city of Moscow where a number of young independent candidates have been elected to municipal councils on the same day as Putin won the national poll.

“It has been the first rally with more or less constructive slogans – to begin the ‘de-Putinization’ [of Russia] with Moscow, by running for municipal councils and up to the mayoral elections,” poet and novelist Gleb Shulpyakov wrote Saturday in his Facebook comment. “Other cities will, as usual, tag along.”

According to a Radio Liberty report from the rally, the call for the protest movement to eventually run for mayor was put forward Saturday by Konstantin Janauskas, an activitst from the opposition movement Solidarnost, who won a seat on the municipal council in Zyuzino District in southwest Moscow. Along with Maxim Kats, Maxim Motin and Vera Kichanova, he was one of the young new deputies in the lowest ranking level of the capital’s government who spoke at the rally.

“People are not as stupid as they are trying to show us,” Kats was quoted by Radio Liberty website as saying. “In my district there are seven independent deputies and eight from [the ruling] United Russia. Just run for office and everything will work out!”

Lyudmila Dubrovina, an editor with Booknik.ru website, said she had been to all the protest rallies since they began in early December following the allegedly rigged State Duma elections, and the one on Saturday has been “most productive.”

“They are young people of my age and similar worldview who ran in local elections and made it,” Dubrovina said in an interview after the rally. “There is a beginning of a shift for people to actually do their work and not just go to rallies.” She added that it was the young new deputies who got most cheers from the crowd at the rally Saturday and not the high profile speakers such as politician Vladimir Ryzhkov or television celebrity Ksenia Sobchak.

The juxtaposition of the wealthy Moscow, where the middle class has actively participated in protests and significantly less people voted for Putin, with the rest of the country, which overwhelmingly supported the status quo both in the pre-electoral rallies and at the polling stations, became a major topic of the last campaign. It now takes an unusual twist with the protest movement claiming Moscow to itself as a political agenda for the future, as the old agenda of “Honest elections” or “Rusia without Putin” is becoming obsolete or unrealistic.

Pavel Salin, a political analyst with the Center for Political Assessment, said the policy of “winning Moscow” faces major difficulties. Yet the emergence of young local deputies among the speakers Saturday was a welcome sign in a situation where the opposition is short of leaders who would be accepted by the people.

“It marks a turn toward the agenda of small deeds and daily government – one of the few things that can maintain the popular support for the opposition,” Salin said. “Because municipal deputies have much more influence on the kind of government people face than State Duma deputies.”