Is Putin’s Russia Keeping Up With a Changing World? 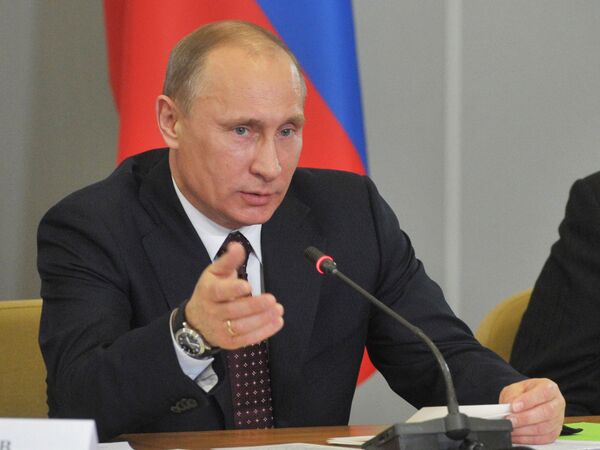 Vladimir Putin has penned a series of articles, logically concluding with his recent piece on foreign policy. On the one hand, he has indicated that foreign policy is a derived function of domestic policy, and that its aim is to create an environment necessary for the country’s internal development.

Vladimir Putin has penned a series of articles, logically concluding with his recent piece on foreign policy. On the one hand, he has indicated that foreign policy is a derived function of domestic policy, and that its aim is to create an environment necessary for the country’s internal development.

On the other hand, the article’s publication shortly before the March 4 election was an astute political move. The article is the ultimate expression of what is described as “Putinism” in the West – tough, pragmatic and politically conservative government, capable of adequately responding to new challenges and opportunities. This is the right approach for the next six years given the emerging international situation.

One set of threats to Russia is based on the differences between the United States and some other countries in their visions of the future world order. The wave of military interventions by the United States and its allies around the world continues, even though they have mitigated their rhetoric. Attempts are repeatedly being made - previously unilaterally and now in multilateral formats - to establish a U.S.-centric system in international relations. The U.S. and its allies continue their attempts to influence the domestic political affairs of foreign countries.

Putin’s February 2007 speech in Munich was precipitated by the events in Yugoslavia and Iraq, Georgia and Ukraine. Putin’s latest article was influenced by Libya, the Arab Spring, growing tensions around Syria and Iran, and the vague future of Afghanistan. One can sense all of these elements in the article.

The rise of China and other emerging economies offers Russia many opportunities, primarily for economic development but also for counterbalancing the most extreme of Washington’s policies. However, growing political and economic tensions between China and the currently ailing U.S. economy constitute a new set of challenges, which could lead to a new global confrontation, this time between the United States and China. Unsurprisingly, Beijing is scrutinizing the Soviet Union’s Cold War experience and the causes for its defeat.

The third arc of instability is developing in the Greater Middle East. Infected with the virus of spontaneous and violent democratization of the Arab Spring, the region is an explosive combination of the ideological, political and religious aspirations of the United States, Saudi Arabia, Turkey, Iran, as well as Israel, the Muslim Brotherhood, al-Qaeda and other forces. Although these projects overlap at times, as in the case of the Assad regime in Syria, they in fact contradict each other and could ultimately lead to a direct confrontation for regional dominance. Other threats come from non-national and trans-national players, primarily in the areas of nuclear proliferation, nuclear terrorism and narcotics trafficking.

The future Russian president will need to take all of this into account. However, Russia’s main challenge now is to secure resources for modernization. Putin’s vision envisages the main resource to be a stable and predictable international situation in which Russia will not need to fear crises in strategically important neighboring regions or interference in its sustained internal development. Hence the goals include the preservation of the global balance of power, the pre-eminence of international law and national sovereignty, and control of the use of “soft power” and new information and communication technologies.

This sounds bold, because success in these undertakings can be achieved only through reliance on the national potential for modernization and Russia’s own resources, albeit with the assistance of foreign investment and research and economic cooperation with other countries, as Putin writes.

Unlike some analytical centers, Putin is not encouraging Russia to subordinate its global aspirations to other countries’ interests in return for investment and technology, but to create internal conditions in which working with Russia would be profitable for foreign business people and scientists. Foreign policy should thus safeguard the country’s national interests, with priority given to improving the country’s image abroad and to protecting Russian companies’ economic interests in foreign markets.

It is therefore logical that Vladimir Putin highlighted the need “to catch the Chinese wind in the sails of our economy” and to “work toward creating a harmonious community of economies from Lisbon to Vladivostok,” which is in line with the concept of the “Alliance of Europe” proposed by Valdai Club experts in 2010. It is logical that Russia is ready to help Europe, because the European Union is Russia’s largest trade partner and export market.

Putin clearly points to the need to use the current positive political relations to further develop trade and economic relations with China. China needs energy, timber, water and food resources to keep up its economic growth and rise in living standards. The development of Siberia and the Far Eastern regions is becoming critically important to Russia. Like Peter the Great, who opened a window to Europe in the 18th century, so we now need to open a window to the Asia-Pacific region – the economic and political hub of the 21st century.

Relations with the United States will be complex, because the ‘reset’ has not, in fact, reset the US-Russian agenda. It has been expanded, including in the framework of the US-Russia Bilateral Presidential Commission and top-level dialogue on a wide range of issues. But a breakthrough has been achieved only on the old disarmament agenda (START). It is true that there has been a positive change in the “atmospherics” of bilateral relations, as the Americans say.

The Obama Administration has fulfilled its commitment regarding Russia’s accession to the WTO and talks are underway to repeal the Jackson-Vanik Amendment. But the level of mutual trust required for the two countries’ alignment on a global scale – the advantages of which were outlined by former US Foreign Secretary Henry Kissinger – has not been secured. Moreover, the unresolved issue of ballistic missile defense and the US stance on Libya and Syria are undermining progress achieved in bilateral relations.

The United States is a global technological leader and close relations with it are necessary for modernizing the Russian economy and for its experience in commercializing research. But can cooperation be stable if it is conditional on the termination of a $1 billion contract to sell Iran S-300 air defense systems in return for potential US investment of the same $1 billion in Skolkovo, but within ten years? The planned supply of the S-300 systems to Iran would not have prevented US companies from investing in Skolkovo had Russia created unique business conditions there, just as Russia’s pro-Western policy of the early 1990s did not ensure the repeal of the Jackson-Vanik Amendment.

Russia will have to work very hard to protect its interests in multilateral economic diplomacy. It has not yet ensured growth rates similar to those of its BRICS allies, which has prompted speculation about the possible removal of the letter R (signifying Russia) from the acronym.

The establishment of the Group of 20 leading economies has undermined Russia’s status as the emerging economies’ representative in the G8. On the whole, Russian diplomacy did well in its efforts to develop bilateral relations in the past decades, while our overseas partners did better in the strategic field of creating coalitions. Learning this skill is furthermore important to secure success in developing the Eurasian Union – the economic integration project for the post-Soviet space, which Putin outlined in his October 2011 article.

Considering the current economic and social situation in Russia, a foreign policy relying on “hard power” but also using elements of “soft power” constitutes a major challenge. It can succeed by relying on the country’s internal development, which implies having sufficient resources for creating the instruments of “hard power” while at the same time using “soft power” to project one’s interests. The latter appears to be questionable given the sizeable approved state defense order (although experts are not sure that it can be fulfilled).

Russia does not have a developed and clearly formulated narrative reflecting its basic principles and values. Its development and use do not involve a return to the historical period when foreign policy was invariably burdened with ideology. On the contrary, it is a way to become aware of one’s place in the world and to project this vision to your partners.Russia currently has only a limited set of “soft power” instruments. It lacks coordination and interaction between the various federal agencies operating in the field. It requires more active and meaningful parliamentary and public diplomacy.

Russia lacks trained personnel in this sphere. Russian diplomats are skilled in traditional diplomacy, methods of “hard security” and the balance of power, but have limited awareness of modern communication practises, including for representing Russian business interests abroad.

*Pavel Andreev is Executive Director of the Valdai Club Foundation.
The views expressed in this article are the author’s and may not necessarily represent his affiliation.