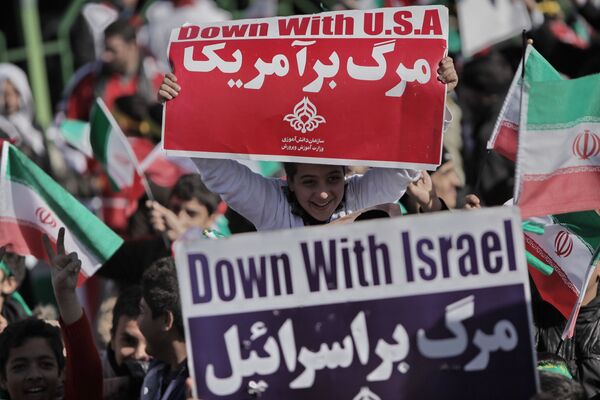 © RIA Novosti . Andrei Stenin
/
Go to the photo bank
Subscribe
The streets of Tehran were as bustling as ever on Monday, betraying little sign of mounting international tensions over Iran’s disputed nuclear program. But Iranians were split on whether the Islamic Republic was on the brink of war.

Motorcycles weaved in and out of Tehran traffic jams on Monday, the city’s bustling streets betraying little sign of mounting international tensions over Iran’s disputed nuclear program. But Iranians were split on whether the Islamic Republic was on the brink of war.

“It doesn’t feel as if a war is coming,” said Abul Fazal, a worker at the city’s massive Grand Bazaar. “But if one does start, I am sure our young people will defend our homeland.”

His colleagues, standing under one of Tehran’s ubiquitous banners of Supreme Leader Ayatollah Ali Khamenei and his predecessor, Ayatollah Khomeini, nodded in agreement.

But members of the city’s professional class were not so optimistic that conflict could be avoided, whispering their fears in guarded conversations amid the aftermath of Saturday’s celebrations for the anniversary of the 1979 Islamic Revolution.

“If war comes, it will be like a massive earthquake for our country,” said twenty-something artist Golshan, her head covered in accordance with Islamic law, in a trendy downtown Tehran café. “I am very afraid, of course.”

Western countries and Israel suspect Iran of seeking to build an atomic bomb, but Tehran says its nuclear program is aimed at the production of peaceful civilian energy and that it has no need of such “un-Islamic” weapons.

U.S. Defense Secretary Leon Panetta was reported as saying earlier this month that Israel could strike Iran between April and June this year to counter what it describes as a significant threat to its national security. The United States has also refused to rule out force.

Tehran has pledged a “painful” response to any attack and has also threatened to block the Strait of Hormuz, a vital Gulf shipping route, in answer to a European Union ban on Iranian oil due to come into force by July.

“The Islamic Republic of Iran takes these threats seriously and we are prepared in every respect and have plans for the worst case scenarios,” Salehi said on Friday, as reported by Iran’s English-language Press TV. “But we know that nothing will happen.”

But in a further escalation of tensions, Iranian Parliamentary Speaker Ali Larijani warned on Sunday of “consequences” for the region if Gulf Arab states continued “plotting” with the United States against Tehran.

Saudi Arabia and other Gulf countries financed Baghdad during the 1980-1988 Iraqi war, and Larijani stressed Iran would not show “forgiveness” a second time.

The war with Iraq decimated a generation of young Iranian men and memories of the conflict live on among older residents of Tehran.

“Who needs war? Two million Iranians lost their lives in the war with Iraq. We don’t need anything like that again,” said a shopkeeper near the city’s sprawling Laleh Park, popular with young couples. He declined to give his name.

On top of the terrifying possibility of war, Iranians have also been grappling with spiraling inflation. Prices for basic foodstuffs have doubled in recent weeks as the United States and European countries tighten sanctions against Tehran.

“It’s becoming hard to get by on an average worker’s salary,” said Abul Fazal. “Even richer people are noticing the price increases, I think.”

Iranian President Mahmoud Ahmadinejad has vowed, however, that Iran will never “surrender” to pressure.

Speaking at a rally on Saturday to mark the anniversary of the 1979 Islamic Revolution, he also said that Tehran would soon reveal “major” progress in its nuclear program. His comments were met with sustained cheers by a crowd waving flags that read “Down with USA” and “Down with Israel.”

And on Sunday, Iranian media said a key underground nuclear facility would become fully operational “in the next few days.” Iran was reported in early January to have begun enriching uranium at the heavily-fortified Fordo facility near the holy city of Qom, in the north of the country.

The move is likely to further ratchet up tensions with Israel and the West.

“War is awful, but it is coming,” said a student, who gave her surname as Manouchehri.

“All politicians are bad, but it is the people who will suffer,” she added, sitting in a quiet park near a gallery of contemporary art. Further down the road, portraits of Iranian “martyrs” in the war against Iraq took up the whole side of a residential building.

But fears of war were waved away with a smile by Ayra, a businessman.

“There will be no war,” he said, speaking through the window of his white Porsche as cars and motorcycles sped by. “War is too expensive for both sides.”

“The United States simply can’t afford to fight Iran right now,” he shrugged, before driving off into the chaos of another Tehran rush-hour.