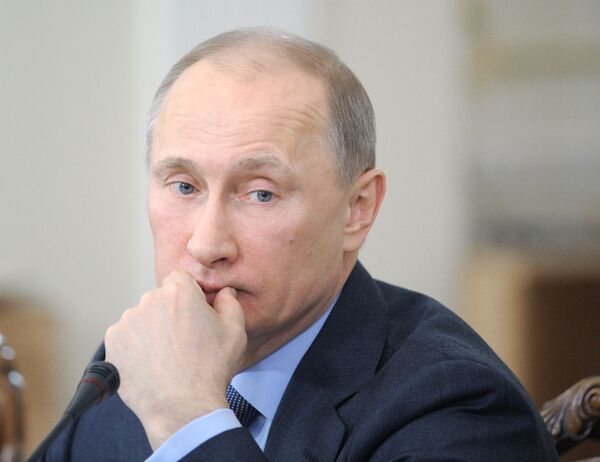 © RIA Novosti . Alexei Druzhinin
/
Go to the mediabank
Subscribe
International
India
Africa
With less than a month to go before a presidential vote in which Vladimir Putin will seek to return to the presidency, the prime minister has said Russia’s democracy needs “touching up” - but critics claim he lacks conviction.

With less than a month to go before a presidential vote in which Vladimir Putin will seek to return to the presidency, the prime minister has said Russia’s democracy needs “touching up” - but critics claim he lacks conviction.

In an article published in Monday’s edition of Kommersant daily, Putin said Russian society had “gone through a difficult process of growing up.”

“We need to create a political system where people can and are allowed to speak the truth,” he wrote. “We need to update the mechanisms of our democracy so that they can take in the increased public activity.”

It is not clear whether he was referring to recent mass street protests against his rule.

The prime minister’s supporters held a rival rally at a different location. Police said 140,000 attended the pro-Putin rally, but a RIA Novosti correspondent said the figure was much lower. Reports on Friday said school heads and postal directors were being coerced to send employees to the rally. Putin agreed this was possible.

Putin, 59, served two terms as president, from 2000 to 2008, but was constitutionally barred from standing for a third consecutive term. While polls suggest he remains Russia’s most popular politician, analysts have said rising public discontent could see him forced into a runoff vote.

In the article - his fourth over the past three weeks - Putin also defended his grip on power, saying his policies throughout the 2000s, including the abolishment of direct governors’ elections and a crackdown on non-profit groups, “consistently reflected the will of the people.”

The rule of former president and his protégé Boris Yeltsin, on the contrary, saw “a crisis of responsible political thinking,” Putin wrote. “In the 1990s, we were faced with anarchy and oligarchy.”

However, he hailed President Dmitry Medvedev’s bill to simplify the procedure for registering political parties but warned against turning politics into “buffoonery.”

The prime minister also proposed online voting for crucial bills going through parliament and called for municipalities to be given more power. His other proposals include making the fight against corruption a “nationwide endeavor” and creating a “new, friendly interface of web portals of public authorities.”

Dmitry Zhuravlyov, director of the Institute of Regional Problems, praised Putin's article as a “huge step forward” in promoting democracy in Russia. “It is a blueprint for action,” he told a roundtable in Moscow.

Vladimir Yablonsky, of the state-backed Agency for Strategic Initiatives, said it was the first time Putin had recognized that “the times have changed,” but Darya Mitina of the opposition Left Front movement said the article caused “nothing but bewilderment.”

“The article doesn’t answer any of the questions it raises,” Mitina told the downtown Moscow roundtable. “And besides, who stopped [Putin] from implementing all that during his first and second terms?”

Mitina highlighted a phrase where Putin said he would “sort out” corruption just as he had “sorted out” the oligarchs.

“Don’t we have oligarchs? Did Abramovich get rid of his assets?” she asked.

Ivan Melnikov, the lower house’s vice speaker and a deputy with the Communist party, said the article was “divorced from reality,” but was also an attempt to “cast protest rallies as the positive result of [Putin’s] own work.”

“It is strange to talk about democracy using the most undemocratic forms of all, a mentor’s monologue via a newspaper,” Melnikov told RIA Novosti. “He can say it all in election debates but Vladimir Putin doesn’t want to do that.”

Putin’s spokesman said earlier this month the prime minister would not take part in the televised debates, to be shown on the national Rossiya and First Channels, because it would “impede his ability to duly carry out his duties.”

Putin has never participated in televised debates with his election rivals.