To boost his bid, Putin needs to retreat from his party: analysts 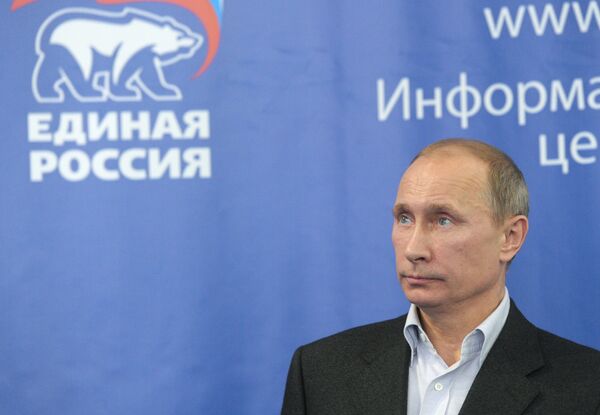 The lower than expected parliamentary election results garnered by Prime Minister Vladimir Putin’s United Russia party should encourage him to distance himself from it and reinforce his image of the national leader for all Russians ahead of presidential elections next March, political analysts said on Monday.

The lower than expected parliamentary election results garnered by Prime Minister Vladimir Putin’s United Russia party should encourage him to distance himself from it and reinforce his image of the national leader for all Russians ahead of presidential elections next March, political analysts said on Monday.

“Putin distanced himself from the party right on time in September when he put President Dmitry Medvedev on top of its ticket,” said Pavel Salin, a researcher with the Center for Political Assessments, a think tank in Moscow. “Now, Putin can use this failure to radically reform the party and will start looking for new ideas for his own presidential campaign.”

Russians voted Sunday to elect the State Duma, the lower chamber of the parliament, in what was widely seen as a test of popular trust in Putin’s policies over the past four years. His United Russia party lost its constitutional majority in the Duma, and had collected just under 50 percent of the vote as of Monday afternoon, way below 57 or 58 percent that the party’s senior officials pledged in the run-up to the vote. The party has nominated Putin, Russia’s president from 2000 to 2008, its presidential candidate.

In September, Putin surprised many Russia observers by effectively appointing his junior partner in the ruling tandem, President Dmitry Medvedev, to lead the party’s election ticket. Putin topped the ticket at the previous elections in the Duma in 2007 when he also assumed the formal leadership of the party shortly before the vote. United Russia collected nearly 64 percent of the vote then.

In the meantime, the relative success of the strategy of casting ballots for anyone but United Russia, a policy which many popular opposition activists promoted before the vote, may lead to an embarrassing low result and even a second round in March, effectively wiping out Putin’s trademark posture of national leader, experts warned.

“We are now entering the field of a public movement “Vote for anyone but Putin”, said Alexander Morozov, a political analyst with the Center for Media Studies think tank.

United Russia was quick Monday to dismiss speculation that the party’s performance would affect Putin’s results in the March vote.

Head of the party’s campaign headquarters, Andrei Vorobyov, said that Putin will win the 2012 presidential elections in the first round.

“We will do everything in our powers to have our candidate win in the first round,” he said.

Aleksei Mukhin, a political scientist with the Center for Political Information, said that it would be in Putin’s interest now to distance himself even further from United Russia before the presidential vote.

Putin needs to come up as soon as possible with new ideas on how to prop up his image of the national leader for all Russians, not just for United Russia and the bureaucratic elite that the public routinely associates with the party, Salin said.

Putin didn’t look content in television footage from the party’s campaign headquarters one hour after the polls were closed Sunday night. Unlike his hand-picked successor, President Medvedev, who smiled and spoke at length about the results of the vote, Putin was unusually curt, saying just that the result reflects the “real situation.”

Putin will use United Russia’s lower than expected results to argue that the election system in Russia is honest and as an argument to counter critics who are already convinced the presidential vote will be rigged, Mukhin said.

“That is why this ‘real situation’ quote was repeated both by Medvedev and Putin Sunday night and also explains Medvedev’s remarks that the vote reflects the democratic choice,” the analyst said.

The Communist and Yabloko parties, opposition-minded media, as well as independent election monitors and even individual bloggers, amassed hundreds of complaints about vote rigging during Sunday elections and the preceding campaign. Authorities deny that the registered violations would have affected the results of the vote.

Also, a relatively weak public campaign by United Russia, especially if compared with the 2007 elections for the Duma, has spared public attention for a later, massive campaign the Kremlin will unfold for Putin before the March 2012 vote, said Yevgeny Minchenko, a political analyst.

“Putin understands that two deafening campaigns for one political force within just several months would backfire during the second vote,” he said.