Russian election monitor under attack ahead of polls 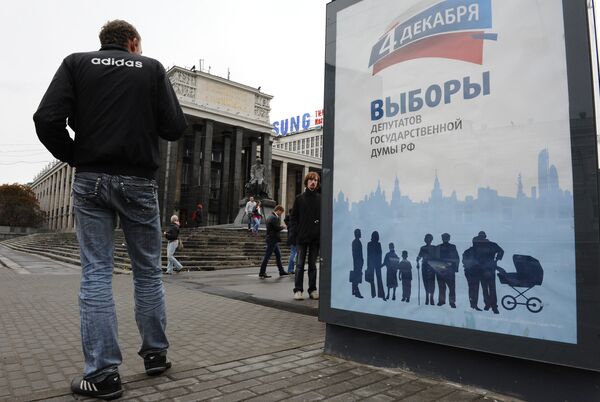 The main independent Russian election observer group, Golos, is almost routinely harassed by authorities, but this time it’s no usual bullying. On Tuesday, lawmakers from three major parties asked prosecutors to investigate the foreign funded body - just five days before Russians go to the polls in a crucial parliamentary vote.

Deputies with the ruling United Russia party, the ultra-nationalist Liberal Democratic Party (LDPR), and the A Just Russia party made a formal request to the Prosecutor General’s Office to look into Golos’ payroll.

The liberal Yabloko party responded with a statement called ‘Hands Off Golos,’ in which it hit out at LDPR and A Just Russia for “sucking up to the party of power.”

Golos said it was part of a broad government campaign to discredit non-profit groups promoting human rights and democracy ahead of the December 4 parliamentary elections, which could see United Russia lose its two-thirds majority.

The move came only days after Prime Minister Vladimir Putin accused “representatives of some foreign countries” of using NGOs to “influence the course of the election campaign” in Russia. Putin signed a law in 2006 giving the authorities far-reaching powers to monitor NGO activities and finances - a move that was widely seen as an attempt to prevent a Ukrainian-style “color” revolution in Russia.

Golos director Liliya Shibanova told a news conference on Wednesday that security services were “exerting colossal pressure” on its regional directors, in one case even prompting the group to hire a psychologist to help cope with the stress.

But while it is no surprise that United Russia is seeking to undermine groups like Golos, the participation of the other two parties was not as predictable. Both LDPR and A Just Russia have employed United Russia’s unfortunate - yet increasingly popular - moniker, “a party of crooks and thieves,” to try to win votes.

“Here the principle ‘the enemy of my enemy is my friend’ doesn’t work,” he went on. “I recognize that Golos’ representatives are not CIA agents… but we should understand that he who pays the piper calls the tune.”

Shibanova said she held no grudge against Belyakov, saying Golos is “not the only one to get pressurized.”

“It’s a pity, though, because the information that we provide we provide for the opposition parties,” she said.

Golos is running the project Karta Narusheniy (Map of Violations) which publishes reports of bribery and coercion.

In the latest installment, authorities in the central Vladimir region are reported to be hastily setting up “temporary polling stations” - an outright violation of election rules.

These tricks are nothing new, though. But compared with the previous election four years ago, authorities are now facing an “equally powerful opposition” from activists and ordinary Russians, Moscow blogger Oleg Kozyrev told RIA Novosti.

“People are making more use of the Internet to expose fraud,” Kozyrev said. “This anger at [United Russia’s] monopoly at the polls is growing, people are getting less afraid.”