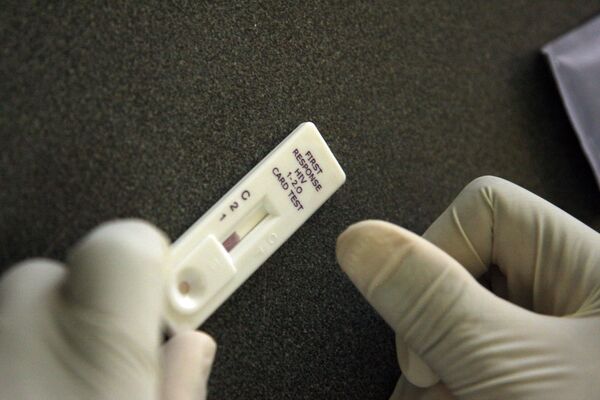 The number of new HIV infections in Russia rose almost 10 percent in January-October 2011 year-on-year, a leading Russian expert on HIV/AIDS said on Wednesday.

"We have registered 48,363 new cases in ten months, up 9.6 percent year-on-year. We expect that more than 62,000 new HIV cases will be detected this year," said Vadim Pokrovsky, the head of Russia's federal AIDS research center.

The statement came ahead of World AIDS Day, observed on December 1. Between 2011-2015, World AIDS Days will have the theme of "Getting to zero: zero new HIV infections. Zero discrimination. Zero AIDS-related deaths."

As of November 1, Russia had 636,979 confirmed cases of HIV infection since recordkeeping began in 1987. The number has almost doubled since 2006. A total of 104,257 HIV patients have already died.

HIV (human immunodeficiency virus) infects cells of the immune system and destroys or impairs their function. Infection results in the progressive deterioration of the immune system, breaking down the body's ability to fend off infections and diseases. AIDS (Acquired immune deficiency syndrome) refers to the most advanced stages of HIV infection.

According to the World Health Organization's 2011 World Health Statistics report, the number of people living with HIV worldwide continues to grow, reaching an estimated 33.3 million people in 2009, with 2.6 million new infections and 1.8 million HIV/AIDS-related deaths recorded in the reporting period.

HIV/AIDS remains one of the world's most significant public health challenges, particularly in low- and middle-income countries. Approximately 10 million people worldwide are in need of antiretroviral therapy but have no access to the treatment.