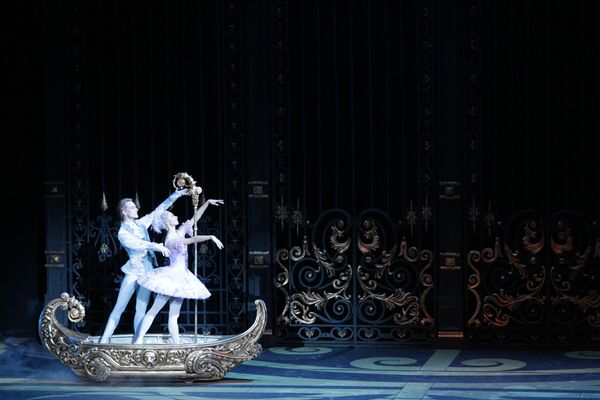 Friday's premiere of Pyotr Tchaikovsky's Sleeping Beauty, the first ballet on the renovated stage of Moscow's Bolshoi Theater, was a great success.

The famous ballet was staged about 550 times since its first production in 1899. This is Bolshoi's seventh production of the ballet, choreographed by Yuri Grigorovich, the author of two successful versions in 1963 and 1973.

The premiere of Pyotr Tchaikovsky's Sleeping Beauty was one of the most expected events in the Bolshoi. The audience hall was filled to capacity

The Sleeping Beauty costumes were sketched by Franca Squarciapino, an Italian costume designer who won the Academy Award for Costume Design in 1990 for Cyrano de Bergerac. Stage sets and costumes were made according to 17th century fashion and style. Today's performance set the theater's unofficial record for the number of dancers wearing wigs.

The main roles of Aurora and Prince Desire were performed by Bolshoi prima ballerina Svetlana Zakhartseva and American Ballet Theatre principal dancer David Hallberg. It was his first performance as a soloist in Bolshoi.