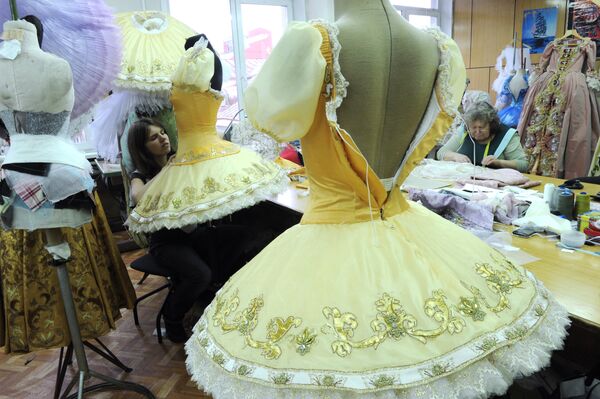 © RIA Novosti . Vladimir Vyatkin
/
Go to the photo bank
Subscribe
Tailors and costume designers of Russia's Bolshoi Theater are preparing more than 400 costumes for the ballet Sleeping Beauty, which is to premiere on November 18.

Tailors and costume designers of Russia's Bolshoi Theater are preparing more than 400 costumes for the ballet Sleeping Beauty, which is to premiere on November 18.

The theater in Moscow held a premiere of the opera Ruslan and Lyudmila on Wednesday night, beginning its regular work after it was reopened last week following six years of reconstruction.

The premiere of Pyotr Tchaikovsky's Sleeping Beauty is one of the most expected events in the Bolshoi.

"Initially, the sketches were in black and white, and lacked details... It was up to us to decide on the colors and decorations," Udod said.

Every costume is made of fabric from the stockrooms of the Bolshoi. Bolshoi colorists select color shades for every garment, and then the fabric is dyed according to a special technology.

The costumes are then sewn and adorned with hand-made decorations and embroidery.

"First it's France, costumes inspired by the musketeer age, they are replaced by rococo-style garments in extraordinary colors and with a plenty of decorations," the Bolshoi female costume designer said.

Another designer, Natalya Fedoseyeva, who is in charge of male garments, said the hand-made embroidery on all sets of clothes were "historic" and "imitate 18th century works."

"For example, small satin-stitch embroidery was popular during that period. And we decided to copy it, but with our own methods, to make it visible from the audience hall," Fedoseyeva said.

Squarciapino will visit the dress rehearsal next Monday to approve the design and make final corrections if needed.