Memories in Bronze and Granite 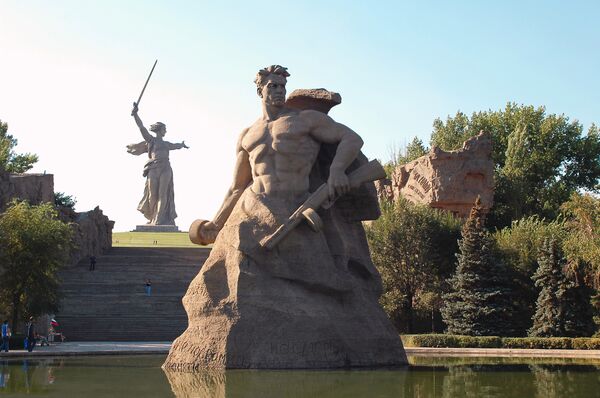 © RIA Novosti . Alexei Babushkin
/
Go to the photo bank
Subscribe
On June 18, 2011, the inhabitants of the Bulgarian capital Sofia woke up to find the monument to Soviet Army soldiers in the city center vandalized. The bronze flag at the center of the composition was spray-painted the colors of the American flag, while the figures of the Russian soldiers were turned into pop culture heroes, such as Superman, Ronald McDonald and Santa Claus.

On June 18, 2011, the inhabitants of the Bulgarian capital Sofia woke up to find the monument to Soviet Army soldiers in the city center vandalized. The bronze flag at the center of the composition was spray-painted the colors of the American flag, while the figures of the Russian soldiers were turned into pop culture heroes, such as Superman, Ronald McDonald and Santa Claus. The monument has since been cleaned up and restored, but Russians are divided in their attitudes toward what happened. While some say that it insults the memory of Soviet soldiers who partook in liberating Europe from fascism, others claim that it is not an act of vandalism, but rather an expressive manifestation of contemporary street art.

Russia itself can boast a large number of monuments and statues: Moscow alone has over 600 of them. While many Soviet-era monuments were removed or relocated following the collapse of the Soviet Union, others have simply weathered away with time. The ones still in place best known to foreigners are, among others, the “Motherland Calls” in Volgograd, sculptor Vera Mukhina’s “Worker and the Kolkhoz Woman” and monuments to Yuri Dolgoruky and Yuri Gagarin, as well as one to other space conquerors in Moscow, and the monument to the defenders of the Subarctic during World War II in Murmansk. Vladimir Lenin’s Mausoleum on the Red Square or the three red anti-tank steel hedgehogs that greet all visitors on their way to Moscow from Sheremetyevo Airport are also part of Russia’s monumental inheritance from the Soviet epoch.

In 1918 a decree issued by the Soviet of People’s Commissars “On monuments in the republic” launched the implementation of Vladimir Lenin’s “monumental propaganda” plan, which presupposed using monuments as an essential means of revolutionary campaigning to promote the communist ideology. A list of 69 people who deserved a monument was compiled by the Visual Arts Department of the People’s Commissariat of Enlightenment, among them famous revolutionaries and social activists, as well as great figures in Russian and foreign culture. Besides monuments to individuals, the plan presupposed the creation of monumental allegorical compositions. From 1918 to 1921 more than 25 new monuments appeared in Moscow and over 15 in St. Petersburg. Although the “monumental propaganda” project never had an official, definitive end, it greatly influenced the development of Soviet monumental art and the domestic school of sculpture.

While many of these monuments have not survived, Vladimir Lenin himself is still very much around: Moscow alone has over 80 statues of the proletarian leader, and like the monument in Sofia, they often fall victim to “artistic vandals.” The tallest statue of Lenin (27 meters) can be found in Volgograd, and the second tallest (25 meters)—in the town of Dubna in the Moscow Region.

At the moment there is not one unified strategy for dealing with the myriad of monuments that Russia inherited from the Soviet Union. Some say that old Soviet monuments and statues should also be painted over and given a new life. “In my opinion, a lot of monuments have to be painted in bright colors; it will be funny. It’s not like it’s wrong, it’s not disrespect for old people, it’s just renovation of monuments. I am 31 years old and I don’t remember the Soviet Union. I really need contemporary art on the street, not something Soviet,” Evgeny Bobrik, a young architect and an expert on social-realist art, told the Voice of Russia radio.

Others believe that old Soviet monuments should be left intact, but endowed with new meanings that would be relevant to the current generation. Artist Natasha Cherkashin, together with her husband, organized a number of artistic happenings involving sculptures at the Ploshchad Revolyutsii metro station in Moscow: the sculptures were cleaned, privatized, and even married to real people. “Our idea was that very soon memorials that were created in the Soviet times will be forgotten. Our attitude toward them will change, and even our children will not remember and will not understand what the Soviet Union was,” said Cherkashin. “When epochs change, people demolish a lot of monuments, because they hate the past that makes their lives so difficult. But after a while, for new generations, they might be really interested to see how it was, what it was, because it was something unconscious. When you look at these sculptures of workers and peasants, you feel something that you cannot explain in words, but it gives you an understanding of this suppression, of this hard time, of this impossibility to feel freedom. So I think it’s important to preserve them, but not everywhere, and not every single one, just the ones that really have artistic value.”

It costs a lot of money to restore monuments and statues: disassembling and restoring the “Worker and the Kolkhoz Woman” statue near the All Russian Exhibition Center in Moscow, for example, cost the city budget 2.9 billion rubles ($ 100 million), and many Muscovites aren’t happy with such money being spent on monuments instead of the city’s other pressing needs. But preservationists and cultural historians stand their ground when it comes to deciding the fate of a monument—monuments should be kept alive for researchers and anyone with an interest, they argue. “We should preserve statues of Lenin because they indeed show us how the cult of Lenin evolved, they do not harm anybody,” said Dmitry Lisitsyn, a member of the coordinating committee of the social movement Arkhnadzor, an NGO that coordinates various efforts aimed at preserving Moscow’s historical monuments and cultural heritage. Lisitsyn also believes that a monument is a genius of the place, and when one gets removed, the atmosphere and the architectural ensemble of a particular space get ruined.

Alternatively, space for numerous Soviet monuments could also be found at museums, as is the case with the Felix Dzerzhinsky monument, which was removed from the front of the KGB headquarters on Lubyanka Square during the putsch in Moscow in 1991 and relocated to the so-called “forgotten monuments” park near the Central House of Artists near the Moscow River embankment.