A battle for Moscow's soul and history 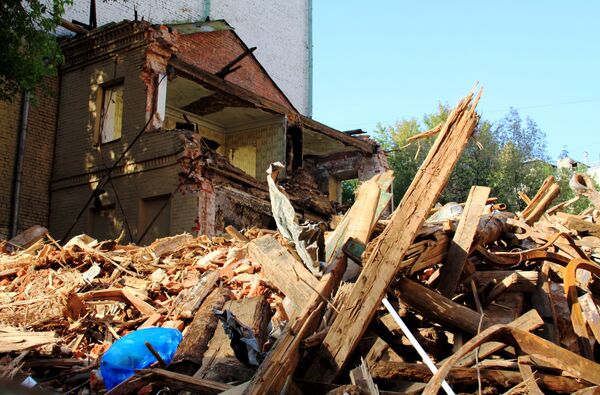 © Photo : Yana Iskakova
Subscribe
For the past month, residents of a quiet alley in central Moscow have been embroiled in an escalating conflict with a property developer that destroyed a historic building without permission.

For the past month, residents of a quiet alley in central Moscow have been embroiled in an escalating conflict with a property developer that destroyed a historic building without permission.

The whole area around Bolshoi Kozikhinsky alley - just a 20-minute walk from Red Square and the Kremlin - feels like a war zone. The ruins of the 19th-century building at no. 25, which was pulled down despite last-minute efforts to save it, are fenced off. There is a palpable tension in the air as a clutch of residents pace the sidewalk in front of a nearby police station, which has the word 'suki,' or bastards, etched into its door.

"This is plain outrageous," says a local resident, who declined to give his name. "All of Moscow is united in fighting against this crime."

At least 20 people were injured after scuffles broke out between residents and masked workmen in the early hours of Monday, as demolition work went ahead - despite an official ban. About fifty locals and heritage campaigners were trying to stop the bulldozers from knocking down the 125-year-old building, which is to be replaced by a new 7-storey luxury apartment block.

The building is the latest to be razed in a demolition drive that has ravaged the Russian capital's historic neighborhoods in the past two decades. In June, there was outrage when two 19th-century buildings were bulldozed overnight in what became known as "the night of long scoops," just weeks after Mayor Sergei Sobyanin forbade developers to demolish listed buildings.

In a press release following Monday's clashes, heritage watchdog Archnadzor said police simply looked on as dozens of masked thugs beat protesters. Ambulances were not allowed to attend to the injured until the police finally moved in.

When I called the Satori construction company for further enlightenment, they merely told me that the building had been "scheduled for demolition."

They were, the spokesman went on, "simply acting on orders," and had "no idea" who the heavies were.

Activists say police could easily find this out, but had so far failed to suggest they were particularly keen on doing this.

Opponents of the demolition also complain they were not consulted - nor informed - properly about plans and say they will take Satori to court because the new building would be disastrous for the neighborhood's architectural harmony.

"Architecturally, the project has been carried out extremely sloppily," Archnadzor activist Dmitry Lisitsyn told me. "An architect is someone who is tasked with installing a new building into the existing environment...but this project breaches elementary construction norms."

"This approach, where a building is stripped of its protected status, does not and will not work here. The authorities should give this some thought. Do they really want to help attract investment in a way that is being met with such opposition? "

Meanwhile, the demolitions look set to go on.