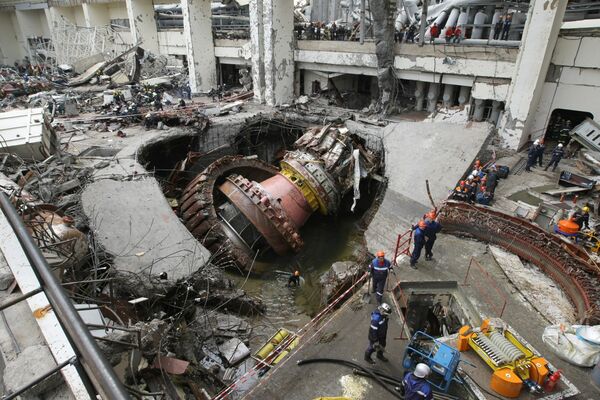 © RIA Novosti . Alexei Druzhinin
/
Go to the photo bank
Subscribe
April is the cruelest month according to T.S. Eliot, but for modern Russia it is undoubtedly August, a time of catastrophe, crisis and political upheaval.

April is the cruelest month according to T.S. Eliot, but for modern Russia it is undoubtedly August, a time of catastrophe, crisis and political upheaval.

For almost two decades, Russians have learned to expect the worst from the eighth month of the year, with 1991 seeing a coup and 2008 war in the Caucasus. Last year saw large swathes of Russia hit by wildfires, with the capital shrouded in a toxic smog.

The complete litany of August chaos and woe reads like this:

Early August 1994 - The notorious MMM pyramid scheme collapses, leaving millions of Russians without their life-savings, a sum believed to be up to $1.5 billion.

August 24, 1995 - The Russian interbank credit system breaks down, leading to the ruin of 28 Russian banks.

August 17, 1998 - The Russian government defaults on its foreign and domestic debt and the ruble loses two-thirds of its value in the next four weeks.

August 8, 2000 - A bomb explodes in a pedestrian underpass in central Moscow killing 13 people.

August 12, 2000 - The Russian nuclear submarine Kursk sinks in the Barents Sea; all 118 sailors on board die.

August 1, 2003 - A suicide bomber attacks a military hospital in the Russian North Ossetia town of Mozdok, killing over 50.

August 31, 2004 - A Chechen suicide bomber blows herself up outside Moscow's Rizhskaya metro station, killing 10. The next day, September 1, sees the start of the Beslan school siege.

August 8-12, 2008 - Russia and Georgia fight a war over South Ossetia after Georgian forces attempt to bring the republic back under central control.

August 2010 - Abnormal heat and wildfires kill 50 people and leave some 2,000 homeless across the central part of European Russia. Moscow is covered in a toxic smog for days on end, with overall pollution estimated at 16 times greater than usual.