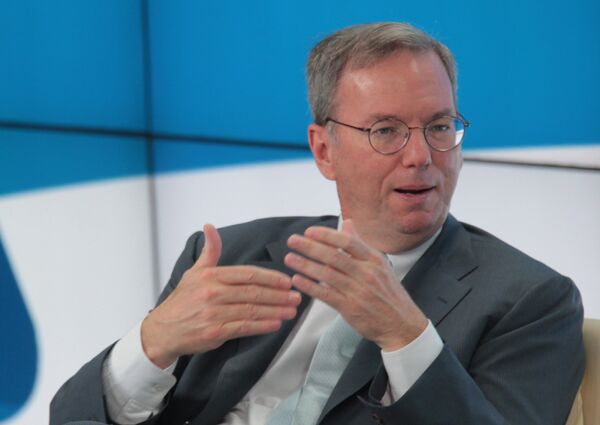 “The adoption of fast broadband connection for every city is pro-democratic, pro-citizen, pro-exports and pro-global. It is an opportunity to create new jobs,” Schmidt said.

The recent revolts in the Arab world were prime examples of the successful usage of digital technology in changing regimes, Schmidt said. “Facebook was used to schedule the protests, Twitter to get people to the protests and YouTube to record the results.”

That phenomenon has not escaped the notice of governments.

In 2009 Iran shut down almost 70 percent of its Internet during the rallies in the Islamic republic. In early June Syria also turned completely offline after several mass protests across the country.

In Russia, a Federal Security Service (FSB) official told a government telecommunications commission in April that foreign online communications services such as Skype, Gmail or Hotmail should be banned from using foreign encryption programs, which could hamper the ability of the FSB to monitor communications.

“The Internet regulation, in terms of banning, is absolutely meaningless,” Russian Communications Minister Igor Shchegolev said on the sidelines of the forum. “It contradicts the sense of the technology itself. The model of the Internet is designed in a way that the information inside it remains unsinkable and self-recovering.”

“It is impossible to resist Internet crime in the framework of one country. Coordination is needed at an international level, as well as the common rules which meet the interest of users and citizens,” Shchegolev said.

Schmidt spoke out against free distribution of face recognition software, following recent concerns about Facebook’s face recognition technology which allows tagging of friends in photos by matching a picture to a database of faces.

“I am very concerned about face recognition broadly applied. With ten or 20 pictures of you sent out of the crowd we can easily identify you, without your knowledge. This activity is in fact not legal without a license because of this privacy concerns,” Schmidt said, adding that the new tool could cause abuse of privacy.

Russia’s President Dmitry Medvedev unexpectedly appeared at a panel session about the Internet economy. Asked whether the Internet should be a part of state policy, Medvedev said Russia must be a fully-fledged part of the digital world and not just an energy supplier.

“If we for some reason fall out of the digital space, we will have significant problems,” he said