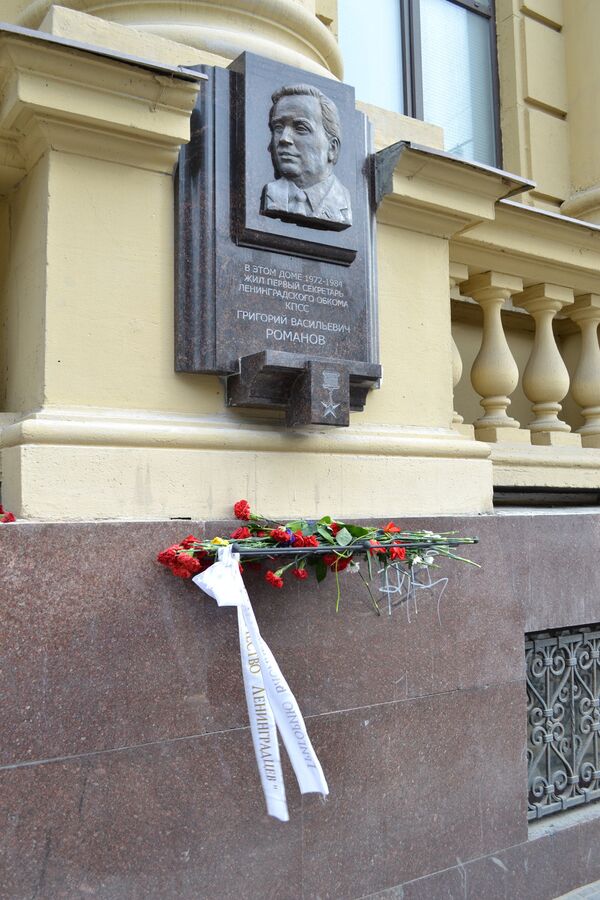 Residents in St. Petersburg have reacted with anger after city authorities unveiled a plaque to commemorate the Soviet-era Communist Party boss behind the persecution of poet Joseph Brodsky and other dissidents.

Residents in St. Petersburg have reacted with anger after city authorities unveiled a plaque to commemorate the Soviet-era Communist Party boss behind the persecution of poet Joseph Brodsky and other dissidents.

The marble plaque outside the former home of Grigory Romanov, the Leningrad regional party chief between 1970 and 1983, was unveiled on Wednesday in what local media said was a private ceremony only attended by family members.

"It's a shame on the scale of the entire country," Boris Vishnevsky, activist of the liberal opposition party Yabloko, told the online newspaper Fontanka.ru. "That the event had not been announced suggests that the organizers were well aware that they could face trouble."

Romanov was also one of the top figures in the Soviet Union's ruling Politburo and until Mikhail Gorbachev took power in 1985 he was even tipped as a possible leader of the country.

He had a reputation as an unabashed hawk and Stalinist who crushed all political dissent and targeted writers and intellectuals including Brodsky, Sergei Dovlatov, Arkady Raikin and Dmitry Likhachyov. Brodsky and Dovlatov were thrown out of the Soviet Union, while satirist Raikin was forced out of St. Petersburg and publicly renowned literary scholar Likhachyov was muzzled.

Romanov was also notorious for his anti-Semitic beliefs, and was once reported to have said that "all Jews are citizens of a country that is a potential enemy."

In the years leading up to his death in 2008, however, he was embraced by then-President Vladimir Putin, a St. Petersburg native, and city Governor Valentina Matviyenko. Romanov "left many a bright page in the history of our country," Matviyenko said on the day of his death.

Many St. Petersburgers decried the decision to install the plaque in downtown Kuibyshev street, saying it could be a slippery slope to the rehabilitation of other controversial historical figures.

"The installment of that humiliating plaque is another step back to Stalinism and, generally, to Sovok [a derogatory term for the Soviet Union]," St. Petersburg writer Nina Katerli said in e-mailed comments.

"This plaque is a spit in the faces of all those who have protested against it," she said. "But the city authorities, and specifically Matviyenko, just don't care about the opinion of the intelligentsia. Romanov could not be bothered about culture."

"It would be a good idea to put up another plaque beside that one to describe in it what he did to expel Brodsky and Dovlatov, Raikin and many others from our city."

Some locals saw the memorial as a sign of larger efforts to gloss over Russia's repressive past.

"I shudder to even think what it could be like in five years' time," says Alexandra Ivanovna, a librarian. "Just imagine: kids could be studying unified textbooks representing a United Russia-approved version of Russian history, which turns a blind eye to the crimes of Stalin, Beria and the like."

The ruling United Russia party has been quietly moving to portray Stalin as an efficient leader, rather than a man responsible for as many as 20 million deaths.

Last year, a row erupted in Moscow over former mayor Yury Luzhkov's plans to put up posters of the brutal dictator in the city to commemorate the end of World War II. The plans were dropped, but many Russians still view Stalin as a hero for his role in defeating Nazi Germany - in 2008 he came third in an online poll to find the greatest Russian ever.

Church historian Archpriest Georgy Mitrofanov said the past 20 years have yet to become part of people's sense of Russia's history.

"Our society has not overcome communism," he said. "Today's society is completely indifferent to our recent history."

"Many view the Soviet past as sweet and close, as the only past possible, as a reminder of their youth," Mitrofanov said. "The worst thing to befall any nation, any country, has happened - a rejection of your own history."

A history textbook published in 2008 referred to Stalin as an "efficient manager" who turned the Soviet Union into a superpower, a cue taken up last year when United Russia drew up plans for a "uniform" textbook building on the glories of the Soviet victory in World War II.