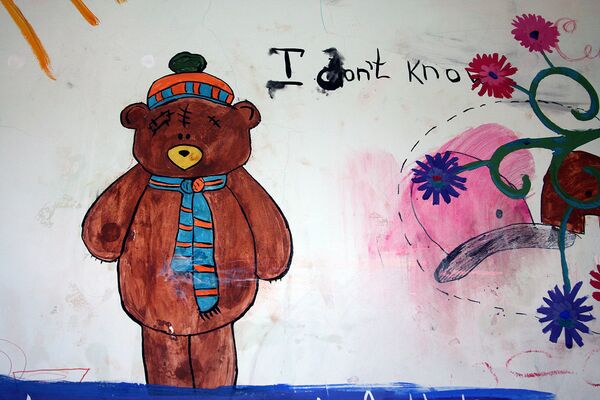 © RIA Novosti . Maria Kuchma
Subscribe
“I left home and spent five days on the streets before the police caught me,” says Lena, 15, tossing back her long black hair from her face.

“I left home and spent five days on the streets before the police caught me,” says Lena, 15, tossing back her long black hair from her face.

“I was a bit drunk when they found me,” she smiles. “Drugs? Of course.”

Lena was admitted to Moscow’s main drug treatment center for minors last week. After the death of her mother and the imprisonment of her father she was forced to move in with her aunt. But things didn’t go well, and she fled frequent quarrels to join a group of teens on the harsh streets of the Russian capital.

Her roommate Katya, 13, tells me she ended up in the center because of “a misunderstanding” with her parents. Her side of the room is decorated with images from the world of drug culture and Japanese anime cartoons. “I like bright colors,” she says, as sunlight streams into the room.

“I’d like to become a hairdresser or designer,” she says. An expression decades older than her tender years plays briefly across her face. She is worried about something. “What will we do when we get out of here in a month?” she asks. “Will we freak out again?”

The average age of Russia’s drug users has fallen sharply over the past decade, experts say. President Dmitry Medvedev announced on Monday that some 70 percent of the country’s 650,000 registered drug users are younger than 30. He also said around 25% were of school age.

The southeast Moscow center that is a temporary home to Katya and Lena is one of three such institutions for children in the capital and the surrounding region. A total of 15 children are currently staying at the center, which sees from 180 to 200 cases each year, center head Veronika Gotlib says.

“Some children come here again and again,” she tells me, adding that her youngest patient was 7 years old.

“It’s always easier to prevent children from using drugs then to treat them. But the drug prevention system absolutely does not work in Russia.”

In order to fight spiraling addiction, Russian doctors and politicians have proposed the introduction of drug tests at schools across the country. Medvedev has backed the plan, but human rights activists have expressed concerns.

Gotlib also seems skeptical about the test system, but for other reasons. “Those tests are likely to be just a waste of money, because it will be easy for a user to hide his or her abuse,” she said.

“First of all, we need to change the social atmosphere in which children live. Using drugs should become unfashionable, like has happened with smoking in the United States.”

The fight against child drug abuse is made harder by the refusal of many parents to believe that their own sons and daughters are at risk, Yelena Sokolchik, the chief doctor at one of Moscow’s drug clinics, says.

“Once I was giving a lecture about drug prevention to parents at a school,” she recalls. “Many of them just walked out, saying that this had nothing to do with their kids. And the worst thing is that many of their children - and I knew this - were using drugs.”

Konstantin Galuzin, the editor-in-chief of Russia’s drug prevention journal, Narkonet, argues that the concerns of rights activists may prove a hindrance as Russia bids to save its children from drugs.

“I would give permission for my child to be tested, and I would explain to him why it is important,” he says. “If you discover that your own child has been using drugs, will you then approve this test or scream about human rights?”

“My dream? Yes, I have one. I want to make my way to the big stage, to play with Benny Benassi,” a 17-year-old patient at the drug treatment center tells me. He identifies himself only as Doctor.

A law college student and DJ at a Moscow club, he used “Ecstasy, LSD and cocaine” to achieve the “right” mood for his sets.

“There are no clubs in Moscow that are free of drugs. Moscow is drowning in drug addiction,” he says. “When you get out of a club to the street, where there are neither parties nor girls, you think how it was good there and try to return there by other means.”

Although Doctor admits that something has “changed” in his mind since he was first admitted to the center, he also fears that his former fondness for mind-altering substances may return when he leaves.

“It’s always in my head - this permanent desire to alter my consciousness,” he admits. “After you get used to taking trips out of reality, it’s very difficult to stop.”

But despite this, Doctor says he is ready to fight for his dreams.

“I am trying to find a way to continue with my job, to play my music - this has been my dream since childhood. I am an optimist. I believe that I will cope.”

As I leave the center, I walk past a display of paintings by its residents. Among the assorted teen psychedelia someone has scribbled “I want to go home - but it’s not bad here.”