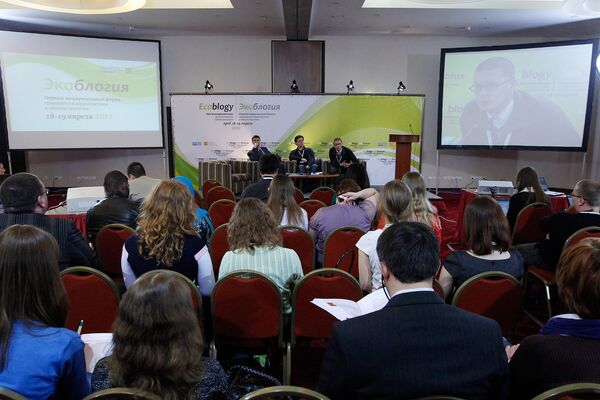 Russian bloggers are becoming increasingly influential in ecological and environmental issues, participants at a Moscow forum said on Monday.

Russian bloggers are becoming increasingly influential in ecological and environmental issues, participants at a Moscow forum said on Monday.

"Right now, bloggers probably have more impact on the local authorities," Yevgeny Arsyukhin, a columnist with the Izvestia newspaper, said at the EcoBlogy forum.

"It all depends on the official," blogger Oleg Kozyrev said. "Some officials want to listen to people, some don't."

"Social networks are immunity to lies, in contrast to traditional media,” he added.

However, bloggers admitted that journalists are extremely important in drawing up a well-balanced, unbiased picture of the world.

"We will not survive without the media," Kozyrev said. "Traditional media has the opportunity to look deeper."

"In a case of an emergency, a blogger is very important," Erda Rindashh, a researcher from Indonesia, said at the forum. "A journalist gives a deeper analysis of the situation."

Bloggers at the forum said they are open for dialogue with governments. However, bloggers from Russia, India and China complained about official and unofficial restrictions on freedom of speech.

"Characteristic for China is not a 'blog' but a 'block'," said Hao Xin, a founder and vice-president of Green Zhejiang, a Chinese NGO which plays a significant role in the Chinese environmental movement. The world’s most popular blogging platforms and social networks, such as Facebook and Google, are blocked in China, he added.

However, the deputy head of environmental protection at the Russian Natural Resources Ministry, Amirkhan Amirkhanov, said that the government often listens to bloggers.

"Information from bloggers comes to government websites," Amirkhanov said. "Part of it is a basis for orders." "

The Internet and the blogosphere is the perfect environment for that," he said. "This system helps to evaluate the effectiveness of the authorities."

Almost everyone at the forum confessed that blogging is a great tool that helps to raise public awareness, but added that it would be better if bloggers, journalists, researchers and other environmentalists worked together.

"If we all come together, then we will have great power," Indian enviromentalist Jayprakash Panwar said.