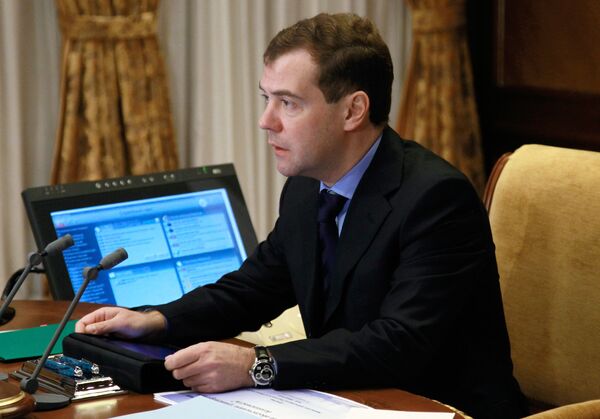 Russian President Dmitry Medvedev on Wednesday sacked a federal transportation security chief in the wake of a terrorist attack on Moscow's Domodedovo airport.

"I have signed a decree relieving [Maj. Gen. Andrei] Alekseyev of his duties as head of the Interior Ministry transport security directorate," Medvedev said.

"If people don't understand how to work, we'll find other people," Medvedev said.

He earlier criticized airport security and said those responsible would be "punished."

Russia needs a modern color-coded security system in the transport sector similar to the systems in use in the West, Medvedev said.

Moscow is observing a day of mourning on Wednesday for the victims of the January 24 terrorist attack.

Monday's blast at the airport arrivals zone claimed the lives of 35 people and left scores injured. No group has yet taken responsibility for the attack, which comes less than 12 months after two female suicide bombers from the volatile North Caucasus struck the Moscow metro, killing dozens.

The identity of the terrorist or terrorists who carried out the blast has not yet been officially confirmed, with conflicting reports suggesting the attack was carried out by a female Black Widow suicide bomber accompanied by a man, or a man on his own.