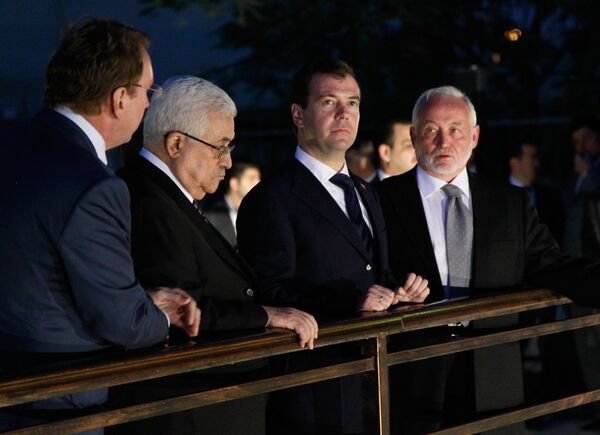 Don't be surprised if you see President Medvedev taking a dip in the Jordan River during his ongoing tour of the Middle East.

Don't be surprised if you see President Medvedev taking a dip in the Jordan River during his ongoing tour of the Middle East. His trip happens to coincide with the Christian holiday Epiphany, celebrated on January 18 and 19. The president's hosts have even prepared a special robe in case he is willing to wade into the chilly water of the Jordan River at the same site where Jesus was baptized almost 2,000 years ago.

Some 100,000 pilgrims a year visit this shallow tributary of the Jordan River, the Wadi Kharrar, which Christian historians generally consider to be the site where Jesus was baptized. Performing ablutions in this river, especially on Epiphany, is more than just a tradition; it is a symbol of spiritual renewal and purification. Many Christians believe that taking part in the ceremony can heal diseases. Pilgrims always take home a small container filled with the holy water, a handful of the holy soil and a locally made christening robe.

President Medvedev will also attend the inauguration of the Russian Pilgrim House on the east bank of the Jordan, which consists of a hospice for travellers and an Orthodox church built over the past three years. Although the interior design is not quite finished, the house is ready to start receiving visitors. King Abdullah II of Jordan gifted the site to the Russian Orthodox Church during a visit by then president Vladimir Putin in February 2007. A year later, a dedication ceremony was held there, during which a time capsule containing a letter to future generations was placed under the cornerstone.

From the east bank of the Jordan River, President Medvedev will go to the West Bank for talks with Palestinian leader Mahmoud Abbas in Jericho, just a half hour drive away. The visit is expected to result in three agreements between the Russian and Palestinian Olympic Committees, their respective agriculture ministries and the news agencies RIA Novosti and Wafa.

In one of Jericho's parks, which previously belonged to the Russian imperial family, Medvedev will attend the opening ceremony for a Russian-financed museum devoted to the history of ancient Palestine. The park is known for a certain ancient sycamore tree, which, as legend has it, Zacchaeus the Tax Collector climbed to get a glimpse of Jesus passing through the crowd.

Initially, the itinerary of Medvedev's tour of the Middle East included a visit to Israel on January 17, with a focus on commercial talks, but it had to be called off due to a strike by Israeli diplomats, causing quite a scandal. In response, the focus of the trip was shifted to projects in Jordan and the general political situation in the region.

In 2007, Russia and Jordan agreed to build two plants in Jordan to manufacture Russian VAZ cars and Ka-226 light-weight multipurpose helicopters. Russia has also committed itself to helping Jordan begin production of grenade launchers. King Abdullah has shown great interest in Russian arms and has already signed several small-scale contracts. Another important item on the agenda is Russia's bid to build the first nuclear power station in Jordan. The winning bid will be announced in spring. Canada and a French-Japanese consortium also submitted bids, as did South Korea before withdrawing in the first round. The parties will also discuss Russian grain supplies, which have been complicated by the drought that hit Russia last summer.

Overall, Medvedev's goals for his current tour of Jordan and Palestine are quite clear; Russia's larger policy in the Middle East is another matter.