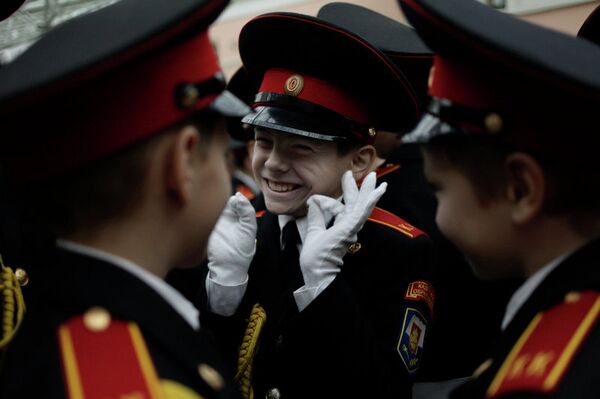 Pre-revolutionary educational practices have begun to take hold in modern Russia as the authorities attempt to reintroduce old-fashioned patriotic ideals and moral values to an apathetic new generation.

The Moscow Musical Cadet Corps, established over eight years ago, has become a desirable place for Muscovites to send their sons. The school is a direct descendent of the once popular tradition of Russian cadet corps.

The schools push their students to the limit and follow a Tsarist era timetable. After a morning of lessons, students undertake music lessons, sport and military training and go on hikes.

"I like the corps but since I joined I constantly lack sleep," moans eleven-year-old Artyom Kaltykov, a rookie in Moscow Musical Cadet Corps.

In the 19th century cadet corps were prestigious military middle schools for boys, distinguished by strict discipline, hard learning and the cultivation of patriotism.

After almost a century of Soviet rule, these concepts have again found a place in Russian society. In late December Prime Minister Vladimir Putin described "all-Russian patriotism" as the best solution to curbing outbursts of nationalist violence in the country.

Emperor Anna Ivanovna set up the first educational establishment of this type in 1732. The accent was laid on technical sciences and military schooling. After graduation, the cadets joined Russian military forces and served the tsar and their motherland.

As the Russian Empire urgently needed young educated specialists with strong technical knowledge and a good helping of loyalty to the ruling elite, cadet corps education caught on and new schools appeared across the country. At the beginning of the 20th century, there were over 29 cadet corps in Russia, attended mainly by the children of noble families.

"Upon joining our corps, a boy immediately became immersed in the atmosphere of the greatness of our Russia," V. Voloshin, a graduate of a pre-revolutionary corps wrote in his memoirs.

During the October Revolution cadets backed the White Movement, a move that led the once reputable schooling system to later fall out of grace with the Soviet authorities.

Today's cadet corps have much in common with their 19th century predecessors, aiming to raise well-educated youngsters, who are distinguished by high moral and patriotic values.

Each class has a form master, who is responsible for encouraging patriotic and moral values among his pupils.

"When you are young, you sometimes get irritated by the power this man has, but in fact his behavior and the decisions he makes set the pattern for all the cadets," Alexei Borzyonkov, 16, says. "The corps teaches us to be real men from childhood; I understood this only when I grew up."